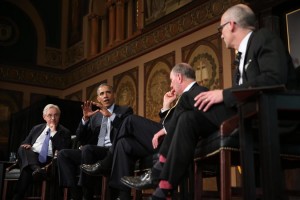 At today’s Poverty Summit,, we were thankful to see attention brought to the issue of poverty in the United States – an issue that is much under-reported and we would like to see become an important focus issue for 2016. President Obama made some great points, and we encourage you to read or watch the entire summit. But one interesting thing the President was gracious in saying was he believed Republicans truly did care about the poor…it’s just that they don’t back up their care and concern with action, legislation. We have held the same observation, since it is obvious many Republicans truly do care and who can judge the heart? However, this becomes a different matter than simple politics since the GOP lays such a claim on being the party for Christians…should it not be surprising, even shocking, that they don’t seem to understand one of the most quoted and fundamental verses of scripture that lay a foundation for way of life for Christ-followers…that faith without works is dead?

Faith without Good Deeds Is Dead

14 What good is it, dear brothers and sisters, if you say you have faith but don’t show it by your actions? Can that kind of faith save anyone? 15 Suppose you see a brother or sister who has no food or clothing, 16 and you say, “Good-bye and have a good day; stay warm and eat well”—but then you don’t give that person any food or clothing. What good does that do?

17 So you see, faith by itself isn’t enough. Unless it produces good deeds, it is dead and useless.

19 You say you have faith, for you believe that there is one God.[a] Good for you! Even the demons believe this, and they tremble in terror. 20 How foolish! Can’t you see that faith without good deeds is useless?

Obama Urges Liberals and Conservatives to Unite on Poverty

WASHINGTON — President Obama on Tuesday called for liberals and conservatives to break through their decades-long disagreements about how to confront abject poverty in America, but he expressed skepticism that it would happen.

Speaking to a gathering of faith leaders at Georgetown University, Mr. Obama said it is his job to “guard against cynicism” while pursuing policies that might improve the lives of poor people in the country. He said he believed that conservatives care about the poor.

But in an hourlong conversation with a liberal professor and a conservative economist, Mr. Obama lamented what he said was a refusal by his Republican adversaries in Washington to put their concern into practice.

“Talk to any of my Republican friends,” Mr. Obama told several hundred people attending the school’s poverty summit. “They will say, No. 1, they care about the poor — and I believe them. But when it comes to actually establishing budgets, making choices, prioritizing, that’s when it starts breaking down.”

“If we can’t ask from society’s lottery winners to just make that modest investment, then really this conversation is for show,” Mr. Obama said. He added later, “If we can’t bridge that gap, I suspect we are not going to make as much progress as we need to.”