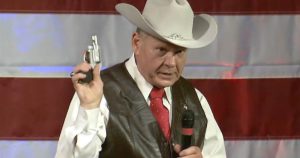 Report: Roy Moore had sexual encounter with teenage girl when he was 32

A new Washington Post report says Roy Moore, the Republican Senate nominee in Alabama, initiated a sexual encounter with a 14-year-old girl when Moore was 32. Others have since come forward saying they were pursued by Moore.

Roy Moore is the extreme far-right, gun-slinging-on-stage Republican nominee for Senate in Alabama. He was the judge who ruled in a 1990s divorce case that a woman who had a lesbian affair couldn’t visit her children unsupervised or with her partner, writing that the “minor children will be detrimentally affected by the present lifestyle” of the mother. He now is facing multiple accusers of predatory sexual behavior.

In any sane world this would end his campaign immediately. What does Roy Moore’s Twitter description say? “Constitutional conservative who has stood up for liberty and religious freedom his entire career.” Ones like Moore, when invoking religion, use God’s name in vain.

The report quotes Leigh Corfman, who Moore reportedly started the sexual relationship with her when he was an assistant district attorney in 1979….Read the full story here.

CDA is a proud supporter of Doug Jones for Alabama Senate. Doug Jones is a social justice advocate and his win in Alabama would have an important ripple affect. Learn more about Doug Jones and Roy Moore’s hard-right “Christianity” in this Huffington Post article.