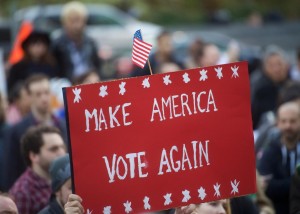 Today a new Washington Post poll was released that shows half of Republican voters seem to want a dictatorship, not a democracy. The survey, taken from June 5 to June 20 and targeting 1,325 Americans, found 52 percent of those who identified or skew more toward the Republican Party supported the idea of pushing back the 2020 election, and 56 percent said they would also support it if Trump and Congress gave their blessing.  They also believe Trump did indeed win the popular vote because 68 percent thought illegal immigrants had voted in the 2016 election, and 73 percent felt voter fraud occurs “somewhat or very often.” This is an alarming trend, since there has been no proof of voter fraud in U.S. elections, however there are proven voter suppression efforts.

If this poll is accurate, half of GOP voters want a dictator while at the same time screaming for small government and independence. It has traditionally been the Republican Party stance that the smaller the government the better, except when it comes to abortion and gay marriage. The GOP hurled accusations of “dictatorship rule” towards Democratic leaders and the Obama administration for the past eight years, when the Obama administration was one of the most transparent governments we have had and there was never a suggestion of voter manipulation or the spreading of false information to voters.

During the 2016 campaign and even after his win, Trump consistently lied to voters regarding voter fraud which has never been proven. He has claimed undocumented immigrants by the millions have voted and that this is why he did not win the popular vote – a claim that has been shown as false according to every credible and bi-partisan source. The Trump administration has started a “voter fraud commission” made up of individuals that have a history in voter suppression and has been seeking private voter data information on the premise of “cleaning up the voting system.” Democrats, Independents and moderate Republicans must take into their own hands the necessity to stop voter suppression and push back again the dis-information campaign of the Trump administration. Until the GOP figures out what it is and stands for within the confines of our Constitution, they should not be governing. We have to turn it around in 2018.

Join our movement and help us turn things around.