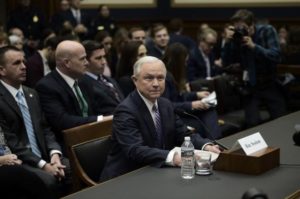 Today was Jeff Sessions’ first appearance before Congress since the testimonies of former Trump campaign advisers George Papadopoulos and Carter Page contradicted Sessions’ former statement before the House committee, that he had no knowledge of any Russian meetings with the campaign. A simple summary of the Attorney General’s statement is:

When pressed again and again by members of the House committee, Sessions attempted to cover any insinuation that he lied under oath by falling back on convoluted statements such as: “I had no recollection of this meeting with Mr. Papadopoulos until I saw news reports. I do now recall the meeting at Trump Tower.”

Sessions also said, “I will not accept — and reject — accusations that I have ever lied. That is a lie. I have at all times conducted myself honorably … I’ve always told the truth.”

So in his previous testimony he could not recall the meeting with Papadopoulos (and still cannot recall dozens of conversations, meetings and statements….), but he is also completely sure he never lied or spoke to anyone regarding Russia? Only one statement can be true. As a former attorney, AG Sessions ought to at least recall that a suspect cannot form a defense around an argument that they cannot remember what did or did not happen, but they are sure they are not lying about it.