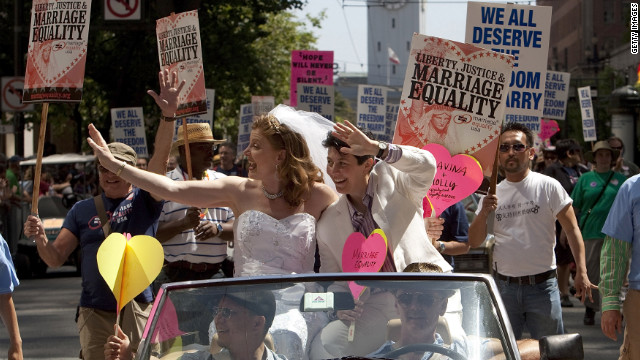 This article brings out an important point of the political Right making this a hot button and front-center issue because of their harsh and outspoken stance against it. I’d like to propose that the same is true spiritually. With some exceptions, we as Christians have alienated a large group of people and the people in their lives who care about them, by not following the scriptures of love, resorting to hateful speech, placing some “sins” on a higher priority than the sins of judgment, haughtiness, self-righteousness… (moral sins and sins of the heart, the latter of which Jesus focused on most). We have created an “us versus them” atmosphere which is contrary to all the examples Jesus showed us of how to interact with the world.

I urge my Christian brothers and sisters, no matter where you stand on the spiritual “right or wrong” of this issue, to let the fight against marriage equality go – it is about civil rights and equal law, not spiritual legislation (see the CDA stand on LGBT rights issues)…and no matter how vehemently you may be against it, is your opinion worth alienating thousands from the church? Seriously…what would Jesus do? He already showed us. *

By Michael C. Dorf and Sidney Tarrow, Special to CNN

(CNN) — After President Barack Obama made his tepid endorsement of same-sex marriage last week, the pundits, from Fox News all the way to The New York Times, quickly pivoted from asking why to whether it will hurt him politically.

But there is a more interesting question: How, in less than a decade, did America go from being a country in which some states punished gay sex with criminal penalties to one in which the highest elected official in the land now champions the right of same-sex couples to marry? The answer can be found in the interaction between supporters of marriage equality and the Christian conservative movement over the past few decades.

As late as the 1980s, same-sex marriage was on virtually no one’s radar screen.

In 1972, the U.S. Supreme Court found the idea of a legal right of same-sex couples to marry so outlandish that it dismissed a Minnesota case presenting the issue without bothering to write an opinion. At the time, the gay rights movement was understandably focused on combating private violence and public discrimination. No single factor explains the movement’s shift to the goal of marriage equality, but much of the credit must go to the very religious conservatives who assiduously campaigned against same-sex marriage, thus forcing the issue onto the front burner of American politics.