Caring for the Poor is Government’s Biblical Role

Compare this complete Biblical synopsis by Jim Wallis with the rhetoric we hear from the Right on welfare, food stamps, budget cuts to programs for the poor, etc. This is what the Bible has to say and reflects our values as Christian Democrats…

Caring for the Poor is Government’s Biblical Role 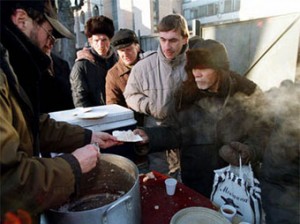 There is hardly a more controversial political battle in America today than that around the role of government. The ideological sides have lined up, and the arguments rage about the size of government: how big, how small should it be? Some famously have said government should be shrunk so small that it “could be drowned in a bathtub.”

But I want to suggest that what size the government should be is the wrong question. A more useful discussion would be about the purposes of government and whether ours is fulfilling them. So let’s look at what the Bible says.

The words of Paul in the 13th chapter of Romans are perhaps the most extensive teaching in the New Testament about the role and purposes of government. Paul says those purposes are twofold: to restrain evil by punishing evildoers and to serve peace and orderly conduct by rewarding good behavior. Civil authority is designed to be “God’s servant for your good” (13:4). Today we might say “the common good” is to be the focus and goal of government.