Hillary Clinton Is the Best Choice for Voters Against Abortion 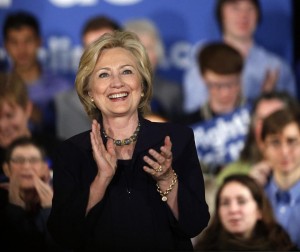 There is no doubt abortion is still a major topic affecting this election, simply because many Christians are voting as one-issue voters. Instead of looking at every other anti-Christian and anti-LIFE policy and word by Trump, these Christians choose to focus on one and only one issue – however, if abortion is the key issue, then as Eric Sapp points out in this informative op-ed, they are with the wrong candidate. In the Vice Presidential Debate the issue came up and Tim Kaine eloquently stated the difference between personal faith, beliefs and not infringing on the rights of others. This is a great article to share with single-issue voters. We have an interview on our podcast with the author, Eric Sapp, that can be listened to HERE!

Hillary Clinton Is the Best Choice for Voters Against Abortion

“I don’t think Christians should be single-issue voters since Christ’s ministry wasn’t single-issue. But if your concern for the unborn determines your vote, Hillary Clinton should be your candidate.”

In my recent op-ed on how there was no Biblically-consistent way for evangelicals to justify voting for Trump, I touched on the false promises Republicans — and Trump in particular — have been making around abortion. A number of people asked that I expand on that point, and given the importance of abortion to many evangelicals, it’s worth a closer and more honest look.

I’ll start by saying that I don’t think Christians should be single-issue voters since Christ’s ministry wasn’t single-issue. But if your concern for the unborn determines your vote, Hillary Clinton should be your candidate.

I imagine there might be a reader or two right about now saying, “But Hillary Clinton is pro-choice!”

That’s true. She has never promised to overturn Roe. She even famously said that “abortion should be safe, legal, and rare.” But all of that is largely immaterial to the question of saving unborn babies.

Here’s the question pro-life Christians must ask: do we care more about talking about the unborn, or do we actually want to do something to prevent abortions?

Now some might argue that words matter — that we need leaders willing to take a stand, even if they never deliver. I’ll get to the “delivering” part shortly, but let’s start with what they say.

Donald Trump and Republican leaders say they are “pro-life,” proclaiming from every street corner their unwavering belief that life begins at conception … and then those politicians turn around and say it’s ok to murder those precious unborn children if they were conceived through rape or incest.

What does it say about politicians who proudly proclaim life begins at conception and then advocate murdering some children because that position polls better? And lest we excuse this hypocrisy as merely a realpolitik compromise required to get something done, the bills Republicans write that include these exemptions are message bills, supported only by fellow Republicans, that no one expects to pass.

I want to be clear, and we all need to be honest. No presidential candidate or party leadership advocates for protecting all unborn children. But at least “pro-choice” politicians who believe the fetus is not a child are being morally consistent.
Read full article here: http://www.christianpost.com/news/hillary-clinton-is-the-best-choice-for-voters-against-abortion-170258/#P7tmY3VMcjCsjUo5.99