We will be following the progress today up through the night of the recall efforts – if you are in Wisconcsin, GET OUT AND VOTE! Follow us on Twitter for updates. 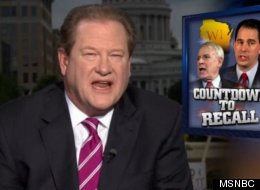 The state is set to vote in a historic recall election on Tuesday. Governor Scott Walker faced demands for a recall after eliminating most bargaining rights for public employees.

Schultz has been very vocal about his opposition to Walker’s plan. He traveled to Wisconsin to report on the recall elections in individual districts last summer.

On Monday night, Schultz urged the state’s residents to vote. “It’s very clear that there’s a number of Republican governors in this country who have gotten together with a radical agenda to go after workers and the middle class,” he said.