UPDATE: They GOT a vote! 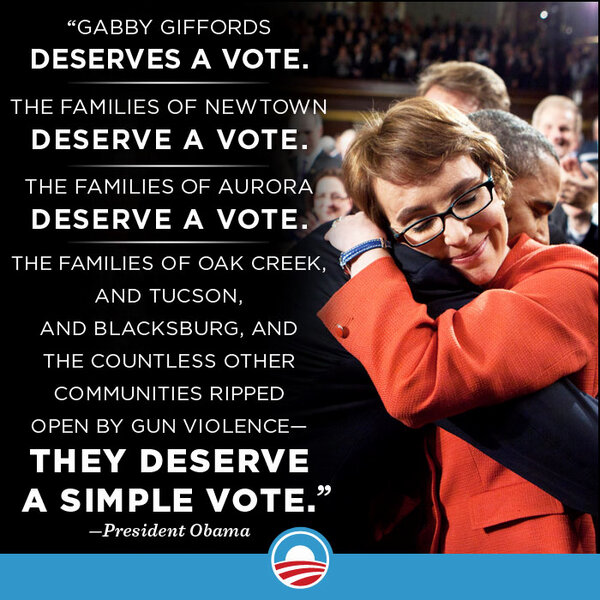 The Senate on Thursday voted 68-31 to move forward and start the most comprehensive debate on reducing gun violence in 19 years.

Senate Majority Leader Harry Reid, D-Nev, said the process of amending the gun legislation will begin — and there are several proposed changes that will be introduced. (more here)

Our Congress is held hostage by a radical minority and is dysfunctional if we can’t even get a vote on an issue of this importance, of this popularity. Even John McCain this said weekend, “I don’t understand it. The purpose of the United States senate is to debate and to vote and to let the people know where we stand…What are we afraid of?” We need to remember who is holding back our democracy from working in 2014.

Thirteen Republicans signed a letter to Reid saying they “intend to oppose any legislation that would infringe on the American people’s constitutional right to bear arms, or on their ability to exercise this right without being subjected to government surveillance.”

They later specifically targeted the motion to proceed to the bill (S 649). Reid made that motion after the Senate resumed work Monday afternoon, but then he turned to morning business.

“I’ve said every idea should be debated and every issue should get a vote, from better mental health treatment, more secure schools, stronger background checks, banning assault weapons, the size of magazines or clips, and other issues should get a vote,” Reid said.

“There are strong feelings and deep disagreements about some of these measures, but everyone of these measures deserves a vote, a yes or a no,” Reid continued. “No hiding, no running from an issue that has captivated America.”