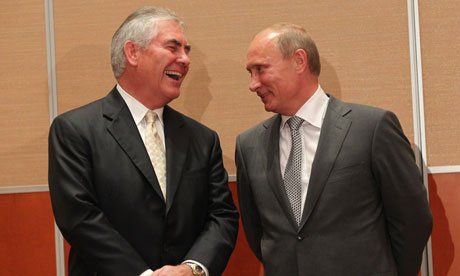 Exxon Mobil CEO Rex Tillerson with Vladimir Putin. The two first met in 1999. Exxon Mobil has lost 1 billion due to US Russian sanctions.

Just hours after it was confirmed that Russia intervened to specifically support Trump in the election, NBC’s Andrea Mitchell just reported that Rex Tillerson, CEO of Exxon Mobil and friend to Vladimir Putin, is going to be Trump’s pick for Secretary of State. Here is some information on Tillerson’s ties to Russia from an article in Heavy.com, with AP, Reuters, Wall St Journal and Bloomberg sources:

Tillerson’s links to Russia date back to the late 1990s, when he first met Vladimir Putin in 1999. in 2011, ExxonMobil began a partnership with Rosneft, the government-owned Russian oil company, for exploration in the Black Sea and Arctic. Two years later, Putin presented Tillerson with the Order of Friendship, one of Russia’s highest civilian honors. In March 2014, Russia annexed Crimea, resulting in sanctions from both the European Union and the U.S. The president of Rosneft was also targeted by the sanctions. In May 2014, Tillerson told reporters that the sanctions had no impact on Exxon’s business in Russia, The Associated Press reported at the time. “There has been no impact on any of our business activities in Russia to this point, nor has there been any discernible impact on the relationship,” he said. “The organizations continue to work business as usual.” Tillerson also said that he believed sanctions were ineffective and opposes them. He said he spoke with U.S. officials about his views. But as 2014 continued, Exxon did start to feel the effects of sanctions. As Bloomberg reports, Exxon could not continue drilling at a well a mile below the surface off the Siberian coast. It was estimated that the well could have pumped out a billion barrels, worth about $97 billion at the time. After the sanctions were imposed, Exxon packed up the drilling rig. In October 2016, OilPrice.com reported that ExxonMobil lost $1 billion due to the sanctions. When The Wall Street Journal reported on December 6 that Tillerson was being considered for a role in the Trump administration, the paper noted that most of his holdings of Exxon shares won’t vest for a decade and the value of these would only go up if Russian sanctions were dropped. Tillerson was also back in Russia in June for the St. Petersburg International Economic Forum for the first time in two years, Reuters reported.

If you see an alarming tie to this news and the CIA report and subsequent reporting that many leaders in the GOP House and Senate did not want the America people to know about the Russian intent to see Trump elected, you are not alone. Here are more facts:

This is a time for Democrats to stand up and be outraged – a “turning of the tables” against injustice moment. We demand a full and immediate investigation before the Electoral College meets on December 19th. Continue to pray all things hidden in darkness will be revealed…soon. Make your voice heard in demanding a complete investigation of the Trump Russian ties and the Russian effect on the election…

Go to asktheelectors.org to write to the Electoral College

Contact the White House and inundate them with emails and calls