Who Holds Our Moral Compass? 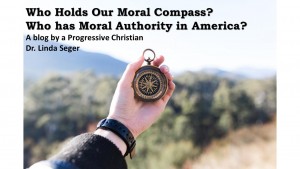 Who Holds Our Moral Compass? Who Carries Moral Authority?
by Linda Seger

Many of us seek some moral authority -a person or group who is a guiding light about important moral and ethical issues. Others set themselves up as the moral compass for our country – asking us to look to them for those sometimes-blurry lines about moral and spiritual truth. In the 1960’s and 1970’s the ‘Silent Majority’ were considered by Nixon and others to be the stalwart moral force in our country. They were Republicans, usually Christian, whose job it was to stand strong against the rebellious Democrats who threatened to turn our country into chaos and dared to question the morality of the Vietnam War.

Then, we had the ‘Moral Majority’ started by Jerry Falwell, who told us that women’s rights and gay rights debased the moral fabric of our country. He supported segregation, called Islam satanic, and said that September 11th was a punishment for the behavior of gays, lesbian. the ACLU, pro-abortionists, and others. Newt Gingrich told us he was a moral compass. but he was an adulterer, later found guilty of ethics violations.

For many years, the Media – both liberal and right-wing – accepted the white Republican Evangelical Christian as the Moral Authority of our country. When they talked about the Christian vote, they referred to the white evangelical Republican vote – not mainstream Protestants or Catholics or black evangelical who were often Democrats.  If they needed a spokesperson for Christian values, they asked Ralph Reed or Glenn Beck or Sean Hannity or Anne Coulter. But we heard anger and hate in their voices, not inclusiveness and compassion.

For some time, I was willing to consider some of these people as one “Voice” for Christianity. I regretted the slant that they were often perceived as the only voice, but I was willing to accept them as “a Voice.” But this year, I am not just angry, but find the hypocrisy to be overwhelming and the message to be a betrayal of Christian values. In this last year and a half, the white Republican Evangelical Christians have lost any moral high ground they might have possessed in the past. Eighty percent of white evangelicals voted for Trump – either wholeheartedly or reluctantly. They excused his groping, his bigotry, his racism and sexism, his disrespect of others, his moral depravity, his serial adultery, his lies, when we needed a prophetic voice, they gave Trump a smile and a pat on the back. When we needed compassion and protection for the poor and the needy, they kowtowed to the wealthy. They professed to care about beliefs and church-attendance. They accepted Trump’s occasional Presbyterianism, but questioned Clinton’s Christianity, in spite of a lifetime as a Methodist who was profoundly influenced by the values and theology of her church. Jerry Falwell, Jr., said we must forgive Trump for a multitude of sins, (in spite of the fact Trump said he doesn’t need forgiveness because he doesn’t make mistakes) but these spokespeople are not willing to forgive Clinton for her inconvenient emails.

This is not the message of Jesus Christ! Jesus did not stand for oppression, exclusiveness, hatred, or mean-spiritedness. He did not hate women and He had no tolerance for hypocrisy.

How does one judge the moral high ground? Are we being judgmental and self-righteous when we try to discern the boundaries of morality, ethics, and Spirit-led behavior?

We could begin with The Golden Rule which is found in almost all religions or spiritual disciplines: “So in everything, do to others what you would have them do to you, for this sums up the Law and the Prophets.” Matthew 7:12. (NIV)

We could also start with the Judeo-Christian Ten Commandments. Almost all of the Ten Commandments are based on trust and honor and a recognition of a right relationship with God, others, and ourselves.

Thou shalt not bear false witness. Don’t lie. List are costly. On the surface, they might seem like just another opinion. But lies are far more than that. The Iraq/Afghanistan wars and Vietnam Wars were based on lies –  and cost hundreds of thousand lives and sent us billions of dollars into debt. The effect of lies keep rippling outwards, cursing the generations that follow.

According to fact-checker Daniel Dale, Trump told 33 lies in the first debate, 33 in the second, 37 in the 3rd Even Pence, known as a fine Christian man, told over 30 lies. Compare that to Clinton’s 4-5 lies.  (My fact checks, based on NPR’s line by line analysis, has a higher count). And the lies continue. A leopard doesn’t change his spots just because a crown and mantle are placed on his head.  Liars cannot be a moral witness.

What is the greater problem with lies? The speaker becomes a false representative of moral authority, they set themselves up as god, and have no sense of a Higher Moral Order. They are their own Divinity.  The first commandment says, “I am the Lord thy God, thou shalt have no other gods before me.” (Exodus 20 and Deuteronomy 5). “No other gods” means- not the gods of ego, money, power, or creating one’s own laws of behavior. Those who make themselves into idols, make their supporters into idolaters.

In the Psalms, we are warned not to be “over-awed with the rich” (Psalms 49) , over-awed with the “strong and mighty” (David and Goliath), or with “kings, emperors or rulers.” There are many stories in the Bible about the evil rulers who got their comeuppance and their pride went before The Fall.

Thou shalt not commit adultery. What does adultery have to do with governing? A great deal. Adultery is about breaking promises and breaking faith. It almost always depends on secrets and lies. The adulterer either justifies this behavior, or denies it, or lacks the self-control to deal honestly with their unhappiness or lust. And covetousness (another commandment about what not to do) often leads to adultery, and theft.

Thou shalt not steal. This means not stealing a living wage from workers in order to enrich their mega-millions, not stealing health care benefits from those who rightfully and lawfully have them, not stealing rights and benefits that are inalienable and belong to all Americans, not just to the rich and members of Congress.

How do we discern morality and ethics? We can ask several questions: Does the person have something to lose – or gain – by their statements? Who benefits and who is harmed when they speak the truth? Dr. Russell Moore might lose his job. Others lost their reputation, their lives, even an election.

Here’s another test: When making their point, do they demonize the other side? According to some, the Democrats can do no right and the Republicans can do no wrong. And, according to some Democrats, the Republicans have gotten so off track, they have all become hypocrites. No matter how much we dislike the other side, we lose our moral authority when we hate and denominizing The Other. All of us are in need of forgiveness, getting back on track, and being redeemed.

Where is our moral authority? Do we need an external moral compass, or will our own internal compass do just fine? What would Jesus do – and who would he care about?  Hopefully, we discern, sort out, seek the truth, knowing Truth can come from many corners. And, we fight against the natural tendency to be self-righteous – and to blame the other guys. We seek to keep loving others, while continuing to seek truth and justice.

Dr. Linda Seger is a member of the Christian Democrats of America advisory board and author of Jesus Rode a Donkey: Why Millions of Christians Are Democrats.