The Dangers of Radicalized Christianity in Government 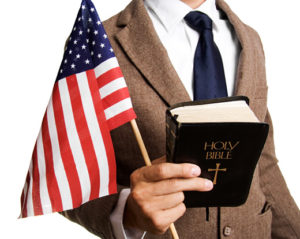 I’d like to take a moment to explain the difference between religion and government.

Religion is the moral map for individuals to live their lives by. These developed beliefs can come from a wide array of writings and teachings. There are many religions in this world and they each hold different things to be true about right and wrong and for different reasons. Religion and belief exists to dictate how individuals should live their lives in a day-to-day sense. It should encourage those believing in their religion to be better people all the time. It can shape and guide integrity, morality, and how one carries him or her self, how they raise their children and spouse and so on. But make no mistake, it is there for the individual. It guides the individual in their individual actions and leaves them solely responsible to their God for their actions.

Government exists, in America specifically, by of and for the People. It’s intent is very different than religion’s. Government exists to create and enforce the laws between people, no matter their religion. These laws are created by people, for people, to dictate how they interact between each other and among themselves.

The misconception that is being touted for more than a generation is that religion can govern a society – and this is not true. See the example in Iran. See the war in Afghanistan. Religion is not meant to dictate how people interact by force, it is there to for individuals to reflect on how they treat each other. Developing a connection with God, especially in Christianity, places the individual responsible for themselves and accountable only to God. You will be brought to judgement, where you account for all of your actions to God, who knows your heart. This is a very individual process. It puts the onus on the individual and how he is treating others, with no judgement on how they are treated. In particular, Christianity is an individual walk with Jesus. It is He who understands you, He who understands your walk, He who understands your feelings about it. It is He you should submit to, daily. He who will show you love in the spirit.

We as Americans are quick to point out how radicalization is terrible. We can point, so easily, at other religions and say “THEY ARE EXTREME!” We can ban Muslims from entering our country, we can remember Al Qaeda, and ISIS and other extremist groups who have committed heinous acts against people all over the world. So, why is it so hard to point at those among us who are trying to radicalize Christianity?

Here is the thing: “You will know them by their fruits (Matthew 7:16).”  These are just a few examples of how this current administration has taken radical ideas and used them against those good people who just thought they were following their religion:

1) They are falsely claiming that Trump is equal to God, or is “God’s anointed…”

THOU SHALT HAVE NO OTHER GODS BEFORE ME

THOU SHALT NOT STEAL

3) Their propaganda has twisted the stories and narratives into lies against those opposed to them (ex: Mexico is sending rapists and murderers)…

THOU SHALT NOT BEAR FALSE WITNESS AGAINST THY NEIGHBOR

Government and religion are not the same. Even our founding fathers didn’t believe so. Famously, Thomas Jefferson re-wrote a Bible without miracles in it. There was a clear separation of church and state. That was no accident. The England they had just left had gone through a religious revolution 200 years before that, splitting from the Catholic Church to grant more powers to the king, who used them to divorce and behead his wives. They knew exactly what radicalism looked like, where it leads, and they had an idea of how to avoid it: leave religion out of government. In the debate about the first amendment there was total agreement on removing a Congress’ ability to name a National Religion. They parsed over language to make sure that religion was legal, but not officially influential in government. The goal was to allow the individual to worship how they will, but understand that governing a populace of many religions would require that they be left alone to guide individuals and small communities in their personal beliefs and morals.

My whole point of this is to say that there is no religion that belongs to political party or vice versa. Christianity as a rule of law will never work. We will end up with more and more radical leaders with less and less care about the people. Such is the way with power. With more and more radicalized leaders who represent us on the world stage standing face to face with the already radicalized leaders of different religions the inevitability of war. That war could literally be the end of our planet as habitable for life. Literally religious zealots could end all of life right now. And make no mistake, the current political climate is just the right temperature for this to happen, because the Conservative Christians have (knowingly or not) begun to radicalize en masse and refuse to have any conversation about their actual religion, but only have political positions. These don’t belong together.

The roles of government and religion are different. Religion should weigh on your conscience. Government has powers over many different aspects of your life that have to do with interactions between and amongst men and women. Make sure you are keeping these separate when thinking of how you would like to be governed, because radicalization is still just that. There is zero benefit to you personally to having a radical government. In fact, it will only serve to make it more likely that you become a target of that radical government or get swept up in whatever scheme they are busy perpetrating on the governed. There is no scenario where they only sweep up the guilty.

So, please, think very hard before you choose party over religion. Study. Pray. Remove your own financial benefits from their policies. Because if your reason for belonging to a party is money, you’ve already been bought.

Justin Anderson is a CDA contributor, one of the hosts of our podcast “What Would Jesus Pod?”, an audio engineer, producer, advocate and a political commentator. Follow him @newman4life on Twitter.