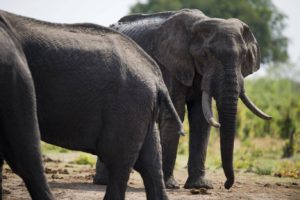 This may be one of the most open morally reprehensible moves the Trump administration has made. Basically legalizing the dark and criminal ivory trade so many from our country and many other partner-countries have worked and fought against.  From USA Today: The Trump administration is reversing an Obama-era ban on hunters importing trophies of elephants killed in Zambia and Zimbabwe during government-approved big-game expeditions. Though elephants are listed as endangered, a provision of the Endangered Species Act allows the government to give permits to import such trophies if there is evidence that the hunting benefits conservation for that species. Hunters typically pay hefty fees to local government agencies for permission to pursue the animals. The official told ABC that they have new information from Zimbabwe and Zambia to support reversing the ban to allow trophy hunting permits.

“It’s a venal and nefarious pay-to-slay arrangement that Zimbabwe has set up with the trophy hunting industry,” said Wayne Pacelle, president and chief executive of the Humane Society, told The Washington Post.

“What kind of message does it send to say to the world that poor Africans who are struggling to survive cannot kill elephants in order to use or sell their parts to make a living, but that it’s just fine for rich Americans to slay the beasts for their tusks to keep as trophies?”

And the Elephant Project, which tries to protect the pachyderms called the suspension of the ban “reprehensible” in a Tweet. (More on this story from USA Today:)

This literally encourages the killing of an endangered species for the benefit of wealthy Americans, such as Trump’s own sons, who have provided photographic evidence of their trophy hunting of endangered species. Just when you think this administration cannot reach another low….

The Bible has clear commands and values regarding treatment of animals, and this is just another example of the consistent degradation of not only basic moral values, but Biblical/spiritual values within “Trump-ism”…

A righteous man has regard for the life of his animal, But even the compassion of the wicked is cruel.

“Are not two sparrows sold for a cent? And yet not one of them will fall to the ground apart from your Father.