Dr. Martin Luther King’s Letter From a Birmingham Jail and the State of the Church in America Today 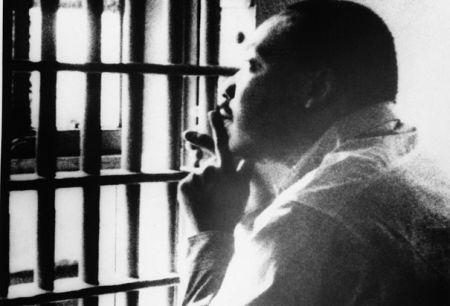 Today on MLK Day 2017, as I read and reflected upon this famous letter, I felt as though Dr. King were speaking directly to us and to my spirit. As a daughter and grand-daughter of pastors and evangelists myself, I feel the heart of Dr. King as he wrote these words in the Birmingham Jail: “But despite these notable exceptions, I must honestly reiterate that I have been disappointed with the church. I do not say this as one of those negative critics who can always find something wrong with the church. I say this as a minister of the gospel, who loves the church; who was nurtured in its bosom; who has been sustained by its spiritual blessings and who will remain true to it as long as the cord of life shall lengthen. When I was suddenly catapulted into the leadership of the bus protest in Montgomery, Alabama, a few years ago, I felt we would be supported by the white church. I felt that the white ministers, priests and rabbis of the South would be among our strongest allies. Instead, some have been outright opponents, refusing to understand the freedom movement and misrepresenting its leaders; all too many others have been more cautious than courageous and have remained silent behind the anesthetizing security of stained glass windows….I have heard numerous southern religious leaders admonish their worshipers to comply with a desegregation decision because it is the law, but I have longed to hear white ministers declare: ‘Follow this decree because integration is morally right and because the Negro is your brother.’ In the midst of blatant injustices inflicted upon the Negro, I have watched white churchmen stand on the sideline and mouth pious irrelevancies and sanctimonious trivialities. In the midst of a mighty struggle to rid our nation of racial and economic injustice, I have heard many ministers say: ‘Those are social issues, with which the gospel has no real concern.’ And I have watched many churches commit themselves to a completely other worldly religion which makes a strange, un-Biblical distinction between body and soul, between the sacred and the secular….In deep disappointment I have wept over the laxity of the church. But be assured that my tears have been tears of love. There can be no deep disappointment where there is not deep love. Yes, I love the church. How could I do otherwise? I am in the rather unique position of being the son, the grandson and the great grandson of preachers. Yes, I see the church as the body of Christ. But, oh! How we have blemished and scarred that body through social neglect and through fear of being nonconformists.”

‘Those are social issues, with which the gospel has no real concern.’ How many times have I seen this argument through the years of building this Christian Democrats movement? It has been one of the first and foremost arguments from Christians against our message and cause. They use this twisted perception of the Word as reasoning why we should not fight for Medicaid, healthcare for all, a fair livable wage, solutions to homelessness…why we should not concern ourselves with politics at all, unless of course it is in regards to abortion or gay marriage. But those issues which truly affect the poor, the sick, “the least of these,” racial injustice, immigrant injustice…we at CDA have all been given the argument that this is not a scriptural cause. That we should all do personally all we can, but it is not up to us to petition the government for social justice – “it is the place of us to give what we can but not the government’s place to help the poor.” Oh, but it is the government’s place to control family planning and who marries who…?

The church as a whole was known for centuries for being a social change agent for justice, for progressive movements to liberate and bring equality. Dr. Martin Luther King makes the point beautifully here in the next paragraph, on the reality of the early church and the social change early Christians brought – a true revival:

“There was a time when the church was very powerful–in the time when the early Christians rejoiced at being deemed worthy to suffer for what they believed. In those days the church was not merely a thermometer that recorded the ideas and principles of popular opinion; it was a thermostat that transformed the mores of society. Whenever the early Christians entered a town, the people in power became disturbed and immediately sought to convict the Christians for being “disturbers of the peace” and “outside agitators.”‘ But the Christians pressed on, in the conviction that they were “a colony of heaven,” called to obey God rather than man. Small in number, they were big in commitment. They were too God-intoxicated to be “astronomically intimidated.” By their effort and example they brought an end to such ancient evils as infanticide and gladiatorial contests. Things are different now. So often the contemporary church is a weak, ineffectual voice with an uncertain sound. So often it is an archdefender of the status quo. Far from being disturbed by the presence of the church, the power structure of the average community is consoled by the church’s silent–and often even vocal–sanction of things as they are. But the judgment of God is upon the church as never before. If today’s church does not recapture the sacrificial spirit of the early church, it will lose its authenticity, forfeit the loyalty of millions, and be dismissed as an irrelevant social club with no meaning for the twentieth century. Every day I meet young people whose disappointment with the church has turned into outright disgust.”

He might as well be talking to the church on this very day. In a recent article “Calling Good Evil and Evil Good,” I said: “Speaking in anger…is not good. Hateful attitudes and lack of compassion towards a person or group because of their immigration status, color, country of origin or religion…is not good. Pride and exalting oneself above others, ego that is out of control, and lack of humility…is not good. Bragging about sexual assault, stereotyping, lying, sexism, exalting one’s wealth, bullying…is never good. None of this is good, yet we have 81% of white evangelicals who have supported and called out what is evil as being good. We have a situation where a large population of our nation’s churches have declared that what Jesus said was evil in his sight, is now good. They have said that what He declared as bitter is now sweet, what He preached as darkness is now light! Thus, we have a spiritual crisis in America.” We must begin to stand up for the things Jesus called us to, and in love call out those who do not, for misrepresenting the Gospel truth.

Dr. King continued in his letter to cite the important exceptions to his encounters and observations, ministers and churches and ministries who did step out of the bubble and stood with him and the cause. Do not be discouraged today, because there are many, many who are still here and willing to make a stand for social justice and to take on the early church action. It is a new kind of revival and if you are a member of Christian Democrats of America and standing with us, you are right in the middle of it. We will stand together and add to our numbers daily and follow the example of Martin Luther King, Jr of truth in love and action.

You can read the entire Letter From a Birmingham Jail here.

Take the Christians Against Hate pledge