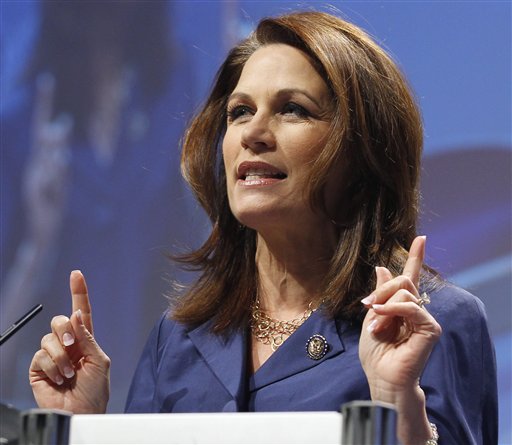 Let us quote Elihu from the Book of Job: “Bear with me a little longer and I will show you that there is more to be said in God’s behalf. I get my knowledge from afar; I will ascribe justice to my Maker.” (Job 36:2-3) And if it is God’s judgment on the land that Bachmann and this Religious Right sect are so very worried about, may we remind them of the warnings of judgment from the prophet Ezekiel…

The people of the land practice extortion and commit robbery; they oppress the poor and needy and mistreat the foreigner, denying them justice. “I looked for someone among them who would build up the wall and stand before me in the gap on behalf of the land so I would not have to destroy it, but I found no one. So I will pour out my wrath on them and consume them with my fiery anger, bringing down on their own heads all they have done, declares the Sovereign Lord.” (Ezekiel 22:29-31)

We must pray, repent? Yes, Mrs. Bachmann, we must. God is looking for “someone among them” to “stand in the gap on behalf of the land”…which is why we also pray that Clinton runs and wins in 2016 and social justice-minded Democrats and Independents run and win in 2014.

It’s no secret that Republicans are concerned about a possible Hillary Clinton presidential candidacy, but one-time candidate and retiring Minnesota Rep. Michele Bachmann’s taken her fear to a much higher level.

In a radio interview caught byRight Wing Watch Monday, Bachmann says that God will help stop the former secretary of state from becoming president, invoking the story of David and Goliath.

“All David needed was one smooth stone to fell the giant,” Bachmann told Christian radio host Jan Markell. “It wasn’t the stone, it wasn’t David, it was the strong right arm of a holy God. And, again, I believe that it’s, in some ways, up to us. If we repent, if we cry out to God, we have no idea what the Lord God will do for us in 2016.”

Conservatives are already devoted to seeing Clinton kept from office, even though she’s yet to visit Iowa (this time around, at least) and is likely more than a year away from any official announcement of candidacy.

While Bachmann and others in the GOP may be loudly or secretly praying against a Clinton run, those prayers might just get canceled out by the other side, including former House Speaker Nancy Pelosi, who says she prays Hillary will decide to run for president.

“Nobody has been first lady, senator and now secretary of state,” she said. “So putting everything aside that she is a woman, she’d be the best qualified person we’ve seen, with all due respect to President Clinton when he went in, President Obama and President Bush and everybody else.”