The Crumbling of the Old “Moral Majority” 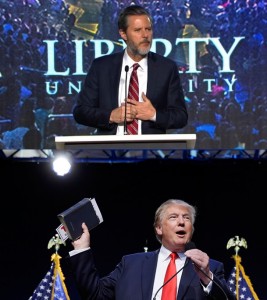 A “Religious Left” is gaining in momentum and number across the country in even the most unlikely places and circles. Christian Democrats of America has been on the forefront of this movement and we are now seeing a shift in tone and rhetoric. It is heartening to see articles like this one and see leaders rising up from all denominations and different faiths to focus on the issues that should most concern people of faith – social justice, poverty, healthcare, homelessness and more. We are rising up to INCLUDE instead of EXCLUDE.

The Rise of the Religious Left: Why the old ‘moral majority’ is crumbling

Bernie Sanders and Donald Trump are not the only ones upsetting politics as usual.The religious left, once overshadowed by a better-organized Christian right, is making a surprise comeback. This growing group of interfaith, interracial, and intergenerational clergy is championing progressive causes in Southern states and winning. As religious conservatives remain divided and perplexed by this year’s presidential candidates, progressive faith leaders are surging ahead. As more than 45 million Americans live below the poverty line and nearly 30 million Americans remain uninsured, progressive faith leaders are working to not only save souls but to improve the quality of millions of lives.

No longer do religious leaders like Jerry Falwell Jr. dominate news coverage of religion and politics. Many of the culture war issues have fallen to the back burner, and the moral economy, championed by Pope Francis and a certain secular Jewish Democratic presidential candidate, has taken center stage this election cycle with narratives of fairness and justice, driving the political discourse.

In 2010, a coalition of progressive and pro-life faith groups, in particular Catholic Sisters, helped pass the Affordable Care Act in part by shoring up pro-life Catholic Democrats who were worried about Christian right myths around funding for abortion.

During the 2012 presidential election season, the Nuns on the Bus Campaign rolled through seven states drawing thousands of supporters as they called for moral budgets, opposing Catholic House Speaker Paul Ryan’s draconian budget cuts to social programs that sustain impoverished communities and seniors.

Justice for immigrants, the other hot topic this election cycle, has been championed by all religious communities. When 20 U.S. governors moved to bar Syrian immigrants in the wake of the Paris bombing, religious leaders from left to right sounded the alarm. Within 24 hours, Faith in Public Life had mobilized hundreds of faith leaders to deliver petitions before news cameras at city halls across the country.

Prominent Southern Baptist leader Russell Moore has repeatedly rebuked Trump and his inflammatory anti-immigrant sentiment in op-eds, media appearances and Twitter warning that Republican candidates might turn off evangelical voters with their lack of compassion. The Catholic Archbishop of Indiana defied his governor by taking in a Syrian refugee family. Even Pope Francis criticized presidential hopeful Donald Trump for his campaign promises to deport more immigrants and build a higher border wall that he would make Mexicans pay for.

The new moral majority of religious progressives and conservatives is focused on addressing racial and economic inequalities, welcoming immigrants, ending the death penalty and implementing criminal justice reform. Progressive congregations are lowering their carbon footprints through clean energy programs and even advocating legislation to incentivize such efforts.

This election cycle the two Democratic party presidential contenders speak the language of faith and values better than the GOP frontrunner. Hilary Clinton is now the most religious candidate running for President. Bernie Sander’s willingness to visit the Vatican at the height of his primary in New York demonstrates that he at least sees a window to galvanize voters around the vision a moral economy. With Donald Trump as the GOP frontrunner, white evangelicals lack a leader for their cause. This election could cement what has already been a growing generational rift among evangelicals who are more supportive of LGBT issues, immigration and climate and reject the partisanship and narrow-mindedness of the Christian right.