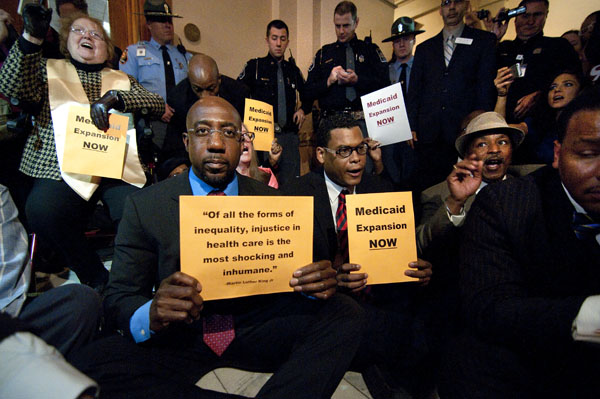 JOEFF DAVIS
Rev. Raphael Warnock, a pastor at Ebenezer Baptist Church, Rev. Martin Luther King Jr.’s old church, holds a sign that quotes the former civil rights icon: “Of all forms of inequality, injustice in health care is the most shocking and inhumane.”

God bless Rev. Warnock, pastor of Ebenezer Baptist Church, Rev. Martin Luther King Jr.’s old church, other pastors, non-profits, church members and activists who put themselves on the line on behalf of the poor, the sick and suffering, and for justice in Georgia. Gov. Nathan Deal recently promoted the idea that the way to fix Georgia’s health-care crisis was to roll-back the law instituted by Ronald Reagan himself that hospitals must treat the poor for emergencies. Basically, let the poor die! Gov. Deal and the Republican-lead Georgia legislature refuse to accept the Affordable Care Act Medicaid expansion that would provide health care for over 600,000 in the state, despite their hospital and healthcare cost crisis and despite the fact that the expansion would cost the state nothing.

If the protesters and basic humanity, or even the fear of God, cannot soften the heart of Gov. Deal, then we must help Georgia elect a new legislature that has respect for human life. This is the definition of “anti-life.”

Let these protesters inspire us all! (Join the CDA Georgia organizing group on Facebook at https://www.facebook.com/groups/ChristianDemocratsGeorgia) 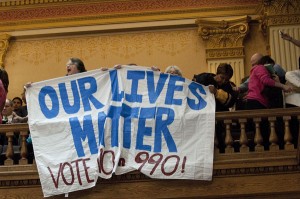 JOEFF DAVIS
Shortly after the first wave of activists was led out by police, another group stood in the gallery and draped their banner.

After weeks of protesting outside the Gold Dome, Moral Monday activists today took their message urging Gov. Nathan Deal to expand Medicaid inside the Georgia Capitol.

Nearly 40 Moral Monday Georgia activists today were arrested for interrupting proceedings throughout the Georgia Capitol in an effort to urge Gov. Nathan Deal to expand Medicaid – and block legislation that would strip him of the authority to do so.

The first group of protesters was sitting in the state Senate gallery that overlooks the upper chamber. Around 11:10 a.m., four activists who were in the gallery’s first row, began to unroll a large banner and loudly chanted, “Medicaid expansion now!”

They were shortly followed by two more groups of four people each shouting, “Medicaid expansion, our lives matter!” The activists were also removed by Georgia Capitol Police. Both waves of activists temporarily stopped the upper chamber from going about their business. The commotion forced Lt. Gov. Casey Cagle, R-Gainesville, to offer a stern warning.

“We take great pride in the Senate being a very open body. But if we have one more outburst like we just experienced I’m going to clear the gallery,” Cagle said after the third interruption by protesters.

A fourth group, comprised of women holding their hands in the air, then interrupted. After authorities arrested 16 total activists, Cagle ordered the entire gallery to be cleared to avoid further disruptions. The detained protesters were placed in restraints and temporarily held inside one of the Gold Dome’s ground-floor rooms.

“We hope to touch the hearts of the Legislature on a part of the poor,” Open Door Community co-founder Ed Loring, who was among the activists arrested, tells CL. “”We have poor people dying. We watch people die everyday because of lack of health care. We work with the homeless. I have watched people die in our yard because of lack of health care. It is outlandish and inhumane. [The fact that] Gov. Deal does not want to accept the money, even though it won’t cost the state a penny, is hard to understand. Gov. Deal is hard-headed and irresponsible.”

John Slaughter, another one of the men arrested, added while being escorted to a holding area: “I don’t want to see people in Georgia die because of lack of health care.”

Following this morning’s protests in the Senate gallery, Moral Monday Georgia activists reconvened inside the Capitol’s rotunda for a 1 p.m. rally with support form a broad coalition of groups, nonprofits, and churches. More than 100 people listened to Revs. Raphael Warnock, Timothy McDonald, and Harriet Bradley urge Gov. Nathan Deal to expand Medicaid in the state.

“Georgians are standing up to an extreme right-wing agenda in the Georgia Capitol,” Moral Monday Georgia co-founder Tim Franzen says. “Moral Monday is calling for people to come to the Capitol to participate in the spontaneous protests that are breaking out all day.”

Activists redoubled their efforts to convince lawmakers not to support bills that would effectively block the Affordable Care Act’s implementation in Georgia, including H.B. 707, which reportedly has received a “significant commitment” from Deal. They also hoped to stop lawmakers from approving a bill that would strip the governor of the sole authority to expand Medicaid.

“No Medicaid, no Deal!” they chanted.

After the speeches, Warnock and other protesters sat outside Deal’s office and blocked his doorway in an act of civil disobedience. Before doing so, the Ebenezer Baptist Church reverend entered the governor’s office and told reporters that he hoped to convince Deal that Medicaid expansion is a “matter of life or death.”

“[Deal’s opposition to Medicaid expansion] is violent in a real sense,” Warnock says. “People’s lives are at stake. We’re saying if the people’s business cannot be done, there will not be business as usual.”

Several activists sat down with their legs crossed in front of his door. They held signs and sang “Let It Shine” with the rest of the Moral Monday activists in the Gold Dome. After about 15 minutes and a warning from Capitol Police, state troopers arrested Warnock and 11 other people.

About 30 minutes later, Moral Monday Georgia launched one final protest in front of the Senate doorway. Holding up orange signs that said “Medicaid expansion now!,” 13 activists sat down and shouted loud enough to be heard inside the upper chamber. Police swiftly arrested the group and escorted them downstairs.

The final disruption appeared to draw the ire of some GOP lawmakers – Sen. Frank Ginn, R-Danielsville, reportedly likened the group to “fecal matter” and Sen. Judson Hill, R-Marietta, promptly tossed a pro-Medicaid flyer into the trash.