Some people just can’t wait a decade. We need a House and Senate that will provide cooperation with the Obama Administration’s ideas and plans – stop playing politics with people’s lives! Join us in praying for these cities, and families without work, and supporting real solutions to job growth that don’t involve giving more breaks to the rich. 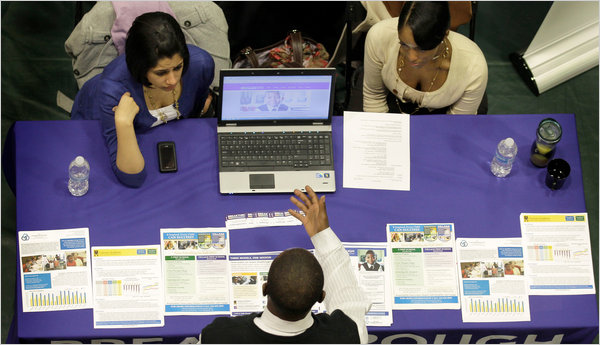 From The New York Times – read the full story here.

Two years into a fitful recovery, unemployed Americans are getting painfully accustomed to the notion that it will take years to bring back the jobs eviscerated by the financial crisis.

In some regions, those years are in danger of turning into a decade. According to a report to be released Monday, nearly 50 metropolitan regions — or more than one out of seven — are unlikely to bring back all the jobs lost in the recession until after 2020.

Among those areas are Cleveland and Dayton, Ohio; Detroit; Reno, Nev.; and Atlantic City, according to the report commissioned by the United States Conference of Mayors.

With job creation having slowed to a crawl and the housing market depressed by foreclosures and falling prices, the economy is struggling to put 13.9 million unemployed Americans back to work.

According to the mayors’ report, which was compiled by IHS Global Insight, the nation’s 363 metropolitan statistical areas tracked by the Labor Department will generate enough jobs to get back to only the prerecession peak of employment in the first half of 2014, a dreary forecast that poses an increasing political challenge to the Obama administration. The areas lost 7.3 million total jobs during the recession from a peak of 118.3 million in the first quarter of 2008.

The report notes that metro regions account for about 86 percent of all jobs.

“It is striking, it’s sobering and it’s a call to action,” said Antonio R. Villaraigosa, mayor of Los Angeles and the president of the Conference of Mayors. Mr. Villaraigosa suggested that the federal government invest in infrastructure as well as work force training. The mayors’ report projected that the Los Angeles region, which lost 537,100 jobs during the downturn, would not gain them back before 2018.

The forecasts do not account for the number of jobs that need to be created just to account for normal population growth. As a result, said James Diffley, senior director at IHS Global Insight, even when the economy adds back the jobs lost during the recession, the unemployment rate, now at 9.1 percent, is likely to be significantly higher than the 4.4 percent it was before the crisis.

Among the largest metropolitan regions that will have a long road to recovery are manufacturing centers in Ohio and Michigan, where huge waves of layoffs at car plants and other factories affected thousands of workers.

“The type of jobs lost are not easily replaced,” said Lucious Plant, work force development manager in Montgomery County, which includes Dayton and surrounding communities. The region was overwhelmed by thousands of job losses at plants operated by General Motors and the parts supplier Delphi Automotive.