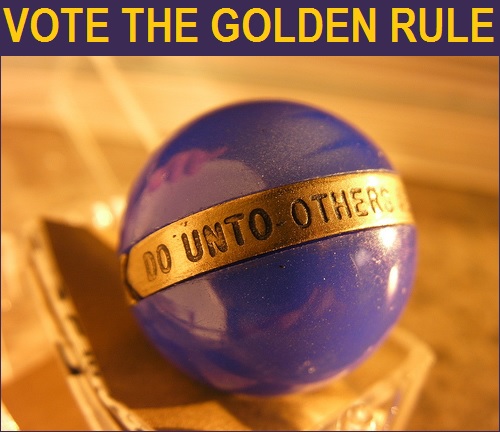 With midterm elections only weeks away, this is an important time to evaluate – whether you are an Independent, Democrat or Republican – which candidate, party and legislation is lining up with your values. What is morally, or spiritually, the right choice? And with all the commentary and debate, the best test for a Christian may be as simple as Matthew 7:12.

What would Jesus be doing in our society? As the Prince of Peace, he would be questioning our wars, which kill millions of civilians and leave millions of children homeless and as orphans.

As the One who accepts and loves, he would be rebuilding homes, instead of blowing up abortion clinics in the name of God. He’d be caring for AIDS victims instead of limiting the rights of homosexuals. He’d be volunteering at soup kitchens rather than cutting food stamps. He’d be planting trees instead of strip-mining public lands, or creating policies that allow pollution. He’d be working to take care of those who have trouble surviving in our society, rather than rewarding the rich.

He would continue to question authority, knowing that power and privilege can easily corrupt. Jesus recognized the potential that power had to become oppressive.  Jesus went beyond labels to people; beyond party to people.

Dr. Linda Seger is the author of Jesus Rode a Donkey: Why Millions of Christians are Democrats, a Huffington Post contributor, contributing writer for Christian Democrats of America and international speaker.