Today President Obama took real steps to save American lives. Despite the outcry from the Right you will surely hear, the Executive Actions on gun violence today did not create new unconstitutional laws, it simply created a pathway to actually enforce the current laws that are on the books and make them more effective. The actions the President took today will help ensure that people who should not have guns can’t get them, and that those who irresponsibly sell without proper background checks will be accountable, as well as aid in the mental health field, which desperately needs it. An overwhelming majority of thinking Americans of both parties agree with these actions. 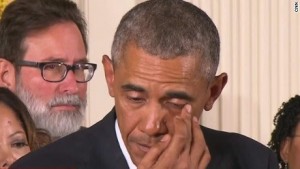 As the President talked about Sandy Hook children and the lives lost, it was easy to see the overwhelming burden of these tragedies on his heart. He showed emotion we are not used to seeing from this president, and his intent was clear. If you are a person with compassion or any kind of softness in your heart, speaking of the children of Sandy Hook Elementary or the other countless deaths due to gun violence will touch your heart. May we remind all that when confronted with the death of an innocent, and seeing the overwhelming grief and suffering of those around Him, Jesus wept. The shortest verse of the entire Bible is a poignant one: “Jesus wept.” (John 11:35) We should too. Thank you President Obama for this action today.

Below are some facts about today’s announcement to help counter the NRA and Right-Wing false information swimming around on social media:

President Obama has announced his plans Tuesday for an executive order that will expand background checks for firearm purchases and put more resources into gun control enforcement.

In an address from the White House, Obama said the order comes following inaction by Congress to address the growing threat of gun violence. The order includes closing the so-called “gun show loophole” that allows some people to purchase firearms at gun shows or via the internet without a background check.

“Until we have a Congress that’s in line with the majority of Americans there are actions I can take within my legal authority…actions that protect our rights and our kids,” Obama said amid a room filled with those whose lives have been touched by gun violence. ‘We’re not here to debate the last mass shooting. We’re here to do something about the next one.”

Obama said he supports the Second Amendment and maintained his order “is not a plot to take away everyone’s guns.”

Here are the 8 provisions in the order, exactly – none of them include the line “Take away all their guns.”

The National Firearms Act restricts sale of weapons such as machine guns and sawed-off shotguns. In recent years, individuals have been able to avoid background checks by purchasing these weapons through trusts, corporations or other legal entities. The number of these types of applications grew from fewer than 900 in 2000 to more than 90,000 in 2014, the White House said. The order will require people purchasing these weapons through trusts or other legal entities to undergo a background check.

Obama said Attorney General Loretta Lynch has written a letter to states urging them to provide complete information, such as criminal history, to the federal database that’s used for background checks. The AG’s office is also asking states to increase communications with anti-domestic violence agencies.

In 2015, the National Instant Criminal Background Check System received more than 22.2 million background checks, an average of about 63,000 per day. Under current law, if a background check isn’t returned within three days, a dealer can move ahead with the sale. To speed up and modernize NCIS, the order directs the FBI to hire more than 230 staffers – a move that would double staff size – and complete technical updates to the database. The goal is for background checks to be processed 24 hours a day, seven days a week.

The order also stipulates requirements related to what happens if a gun is lost or stolen while in transit to a firearms dealer. Dealers are required to report lost or stolen weapons from their inventory but the laws related to guns that go missing during transit aren’t as clear. Under the new order, the licensee shipping the gun will be responsible for reporting it missing or stolen.

The White House is proposing to spend $500 million for increased mental healthcare services. Other provisions include reporting of Social Security information to the background check system, a move designed to keep those with mental health issues or who receive disability payments due to mental impairment from purchasing firearms.

The president is issuing a memorandum to the Department of Defense, Department of Justice and Department of Homeland Security to increase research into gun safety technology. The memo also directs the agencies to promote the use and acquisition of new firearm technology.

The White House said the president’s 2017 budget will include funding for 200 new Bureau of Alcohol, Tobacco and Firearm agents to enforce gun laws. Another $4 million will go towards enhancements to the National Integrated Ballistics Information Network, which tracks evidence that can be used to link gun-related crimes.

Require gun dealers, whether they sell in a store, at gun shows or over the internet, to conduct background checks on those wanting to purchase a firearm. The administration is not setting a limit on the number of transactions someone can make before they are considered a “gun dealer” but notes that “even a few transactions” can be enough to require a license and a background check. Failure to obtain a license can result in up to five years in prison and a fine of up to $250,000.