From the Occupy Movement to now the bank revolt, this is not about partisanship, or any of the negative spins (more like heartless bashing of the poor and middle class victims by some) GOP candidates are trying to put on these crowds. These are citizens who are rising up and fed up with the greed and corruption – fedup with having no jobs, no healthcare, being stuck with all the bills while the rich get richer. Let’s see what happens for the working class if we ALL switched to locally owned banks.

The BofA chief says “We have a right to make a profit.” 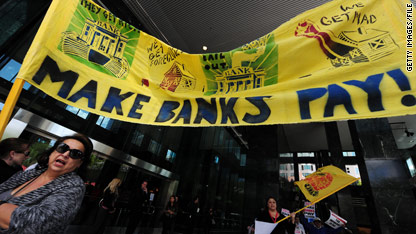 Recent fee hikes from some of the nation’s biggest banks have attracted the wrath of customers, some of whom are taking their business elsewhere.

Prime targets: Banks of America, which slapped a $5 monthly fee on debit cards, and Citigroup (C,Fortune 500), which will start charging $20 a month for some checking customers who don’t maintain a $15,000 balance on their combined accounts.

“I dropped Bank of America like a hot potato,” said Tim O’Brien a partner in a Seattle-based television advertising agency. “I felt like I was getting nickel and dimed.”