Democrats Forced Al Franken to Resign – Now They Must Act on Trump, Moore

Democrats Forced Al Franken to Resign – Now They Must Act on Trump, Moore

Al Franken was forced to resign because of pressure from his colleagues, who chose not to give him due process of an ethics investigation, 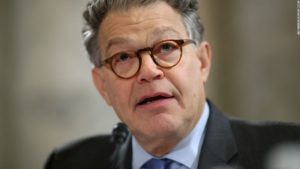 which he himself had suggested. The first accuser, Leeann Tweeden, reportedly has ties to Roger Stone and actor Tom Arnold accused her on Twitter of being “coached” on how to bring down Franken. The most recent accusations are from “unidentified women” and the public has no way of judging whether these accusations have any credibility. The Democrats in the Senate who have demanded Franken’s resignation  believe Democrats must hold a moral high ground in this time of reckoning on sexual assault – if this is the case, then every person who demanded the resignation of Al Franken MUST also demand the resignation of the President of the United States and, should Roy Moore be elected, his immediate resignation. They must use every single tool at their disposal, call for ethics committee investigations, form committees, use social media and not back down in weakness – to not do so now would be to utterly fail their constituents, Senator Franken’s constituents, the entire “Me Too movement,” and the country.

“I of all people am aware that there is some irony in the fact that I am leaving while a man who has bragged on tape about his history of sexual assault sits in the Oval Office, and a man who has repeatedly preyed on young girls campaigns for the Senate with the full support of his party,” Mr. Franken said.

Both Donald Trump and Roy Moore have more credible, more numerous and much worse accusations against them. There have been various witnesses, character witnesses and deep investigations that have given the accusations of child molestation against Roy Moore enormous credibility. Likewise, we have proof on tape of President Trump bragging about multiple sexual assault violations, and sixteen women came forward with specific accounts. There is no reason to doubt these accounts. Al Franken’s accusations, due process, response to accusations and type of accusations are different, yet Democrats were quick to demand the resignation of one of our best Senators. The “Me Too Movement” is requiring new conversation on what is and is not a red line – if Franken’s alleged conduct crossed that line, then Trump and Moore’s alleged conduct is yards beyond. If Democrats do not step up right now, today, and demand the resignation of the President and Roy Moore, if he is elected, then they simply just did what Democrats have been doing best the past two years – eating themselves alive with weak leadership at the expense of the country.

It is time Democrats fight with everything they have because the other side has been and they will not back down because of apparent hypocrisy. Any Democrat who believes the GOP cares about obvious double-standards is naive at this point. If they don’t step up and show strong leadership on demanding these resignations immediately, Democrats just lose again….without anything to show for it except moral bragging rights that mean nothing to Republicans, and an empty Senate seat where a great Senator who fought for the people once sat.

Don’t celebrate Franken’s disgrace. And don’t let Trump and Moore off the hook.