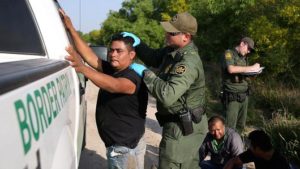 At a time when border crossings are at an all-time low, Trump deploys the National Guard to the border. It is very costly to have a government that is being run based on conspiracy theories and propaganda news. More than ever we need to hold fast to truth. As the article below points out, those crossing the border now are more likely to be asylum seekers from South America, trying to escape torture, violence and poverty. They are not a threat to our country – those who claim to be Christians and purposefully spread anti-immigrant propaganda against these desperate people should remember what Jesus said in Matthew 25:

44 “They also will answer, ‘Lord, when did we see you hungry or thirsty or a stranger or needing clothes or sick or in prison, and did not help you?’

President Trump is signing a proclamation to authorize the use of state National Guard forces to protect the US-Mexico border — where inflows of immigrants are at historic lows.

You read that right.

The president has the legal authority to do this, as long as governors of border states acquiesce — and agree to foot the bill. (Given that three of the four governors of southwestern border states are Republicans, their agreement looks likely.) But just because it’s legal doesn’t necessarily make it a good idea.

Homeland Security Secretary Kirstjen Nielsen said on Wednesday, announcing the mobilization, that “the threat” of drug smuggling and illegal entry “is real.” But it’s not clear precisely what threat the administration is trying to address with a National Guard mobilization.

National Guard troops aren’t sent to the border to literally fight off immigrants — that’s still illegal. They’re not even sent to the border to catch immigrants; only Border Patrol agents are authorized to do that. So during previous mobilizations, the National Guard has done a mix of surveillance and intelligence work to help Border Patrol agents track down immigrants, and support work to help process those immigrants once they’re apprehended.

In February 2018, the last month for which statistics are available, Border Patrol agents caught 26,666 immigrants attempting to cross the US-Mexico border.

The month before President Obama mobilized the National Guard, 55,237 immigrants — more than twice as many — had been apprehended. And the month before Bush did it, Border Patrol apprehended 126,538 immigrants. In other words, the threat was six times worse.

Furthermore, many of the people who are coming to the US right now are people who are trying to turn themselves in to Border Patrol as a way to seek legal status in the US. They’re unaccompanied children, or families, from Central America; they might be trying to claim asylum because they fear persecution or torture in their home countries.

National Guard troops can certainly help process those people, helping set them up with asylum officers to screen them and coordinating with other agencies to transfer them into custody while they wait for their cases to be resolved.

But that’s not what the Trump administration says it’s doing. It says it’s mobilizing the National Guard because there’s a threat.

Deploying the National Guard to help guard the border won’t have a huge impact on drug smuggling, which is much more common through ports of entry — airports, seaports, road crossings — than by sneaking across the border. And it won’t prevent people who are trying to cross the US to seek asylum from being able to do so.