25 reasons from 25 people who are voting Obama (and some of our own!) 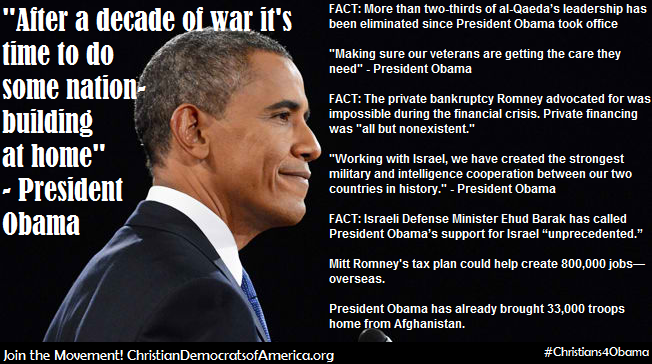 25 reasons from 25 people who are voting Obama:

2. “Obama is for the vets. He helped us wind down in Iraq, he’s improved mental health policy with VA benefits.”
Joel, Minnesota

3. “Obama stuck his neck out for us, the auto industry. He wasn’t going to let it just die, and I’m driving in this morning because of that, because of him.”
Brian, Ohio

8. “When Obama came into office, he successfully renewed our country’s place in the community of nations, making cooperation in tackling the world’s challenges possible.”
Willis, North Carolina

9. “The actions he has taken with respect to protecting us from terrorism have been very, very solid.”
Colin Powell, Virginia

10. “I was really very grateful to him for standing up for those kids who are having a really rough time out there because of their orientation.”
Jane Lynch, California

11. “For me, President Obama is our best choice because he has a vision of the United States as a place where we are all in this together.”
Bruce Springsteen, New Jersey

12. “He has a real plan for rescuing the economy that passes the ‘math’ test.”
Teresa, Virginia

13. “Having someone in office who understands how powerful our voice can be is very important.”
Jay Z, New York

14. “I am voting for Barack Obama and Joe Biden because I can trust them to care for the middle class and restore the American dream.”
Steven, Florida

15. “The first measure he signed into law after becoming president was the Lilly Ledbetter Fair Pay Act — so a female high school counselor or physical education teacher can fight for equal pay for equal work.”
Connie Britton, California

16. “I believe in the America he wants for my grandchildren.”
Nancy, Michigan

18. “I’ve watched him fight for our country, stand by the middle class, the working class, the military, the education of our children, universal health care, women, the environment, and matters of national and domestic security.”
Susan, Virginia

19. “The gifted 12-year-old I taught, whose parents were deported and left her here with her grandmother, will be allowed to stay and finish her education. She’s been in the U.S. since age one.”
Jamie, North Carolina

21. “I have four children who are under 26 and able to stay on my health care plan. That’s been huge.”
Amy, Pennsylvania

22. “He’s fighting to defend and better Social Security and Medicare — because millions of Latino seniors rely on them.”
Cristina Saralegui, Florida

23. “Thanks to the President’s efforts to keep student loan rates low, I can expect to save nearly $1000 as I work to repay my student loans. And I don’t have too many of those, thanks to the Federal Pell Grant program.”
Sam, Minnesota

24. “It’s been wonderful to have President Obama as a champion for access to health care for all women in this country.”
Cecile Richards, New York

25. “Re-electing Barack Obama would lead to a stronger economic recovery than would be the case were Mitt Romney to win on November 6th.”
Jared Bernstein, Washington, D.C.