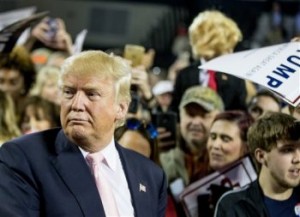 We don’t often quote the Twilight Zone, but with the recent eruption of violence and stoking of anger and fear at Trump rallies, it is eerie how similar the Twilight Zone Episode, “He’s Alive” resembles the rhetoric  at these rallies – perhaps even prophetic! The clip below shows a familiar figure coaching a young man on how to identify with his crowds, control his crowds and grow his mob. The entire episode is also posted below – it is truly a striking resemblance to some of the speeches and arguments we’ve been hearing, from foreigners taking our jobs and coming to harm us, to creating a distrust of authority. The GOP have created this climate, and they must now stand up against it or it will destroy their party.

The entire episode is below.