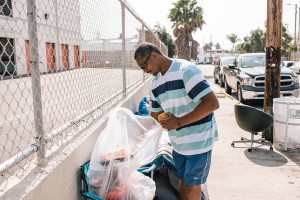 Carl Williams, on and off the streets for some 30 years, looked through a bag of food a passer-by gave him in Venice, Calif., on Tuesday. Credit Jonathan Hanson for The New York Times

Finally, we have a major city putting in a sincere effort, even if it may not be enough funds by some estimates, to help solve chronic homelessness and help families get off the streets. Los Angeles has been one of the many cities that has enacted measures to criminalize homelessness instead of creating affordable housing and helping people out of extreme poverty. We hope and pray that this measure will encourage other cities to use any means necessary to create affordable housing, job opportunities, raising the minimum wage and other services to end the crisis. When we see humanity suffering in this way around us, it truly is state of moral emergency and should be taking priority. Take special note from the article below how many of the homeless are actually working parents who can’t afford to get into housing even with working multiple jobs.

We are still waiting to hear any of the 2016 candidates talk about the homeless crisis.

LOS ANGELES — Flooded with homeless encampments from its freeway underpasses to the chic sidewalks of Venice Beach, municipal officials here declared a public emergency on Tuesday, making Los Angeles the first city in the nation to take such a drastic step in response to its mounting problem with street dwellers.

The move stems partly from compassion, and in no small part from the rising tide of complaints about the homeless and the public nuisance they create. National experts on homelessness say Los Angeles has had a severe and persistent problem with people living on the streets rather than in shelters — the official estimate is 26,000. The mayor and City Council have pledged a sizable and coordinated response, proposing Tuesday to spend at least $100 million in the next year on housing and other services. They plan, among other things, to increase the length of time shelters are open and provide more rent subsidies to street people and those in shelters.

Increasingly, young families are becoming the most potent symbol of homelessness, with mothers who work multiple jobs living in shelters in New York or in their cars in Los Angeles.

“This is the fallout of not having anywhere near the affordable housing that’s needed,” said Megan Hustings, the interim director of the National Coalition for the Homeless, a Washington-based advocacy group.

“It is repeated all over the country: We work to get them emergency food and shelter, but housing continues to be unaffordable, so you see people lingering in emergency services or going to the streets.”

In Los Angeles, rents have soared all over the city and housing vouchers usually cover only a fraction of the rent for a home near public transportation. Efforts to build new housing units have floundered, and the city’s spending on affordable housing has plummeted to $26 million, roughly a quarter of what it was a decade ago.

Neighborhoods that were once considered hubs of relatively inexpensive motels and single-room apartments — Venice Beach, the Downtown Arts District — have been transformed into well-to-do enclaves filled with cupcake emporiums and doggy day care centers.The spending proposal will need to be approved by the City Council and allocated by its Homelessness and Poverty Committee. The $100 million figure was chosen in part for its symbolism, said Herb J. Wesson Jr., the City Council president, to show county, state and federal officials that the city was willing to make a significant contribution to an urgent problem. “Today, we step away from the insanity of doing the same thing and hoping for different results, and instead chart our way to ending homelessness,” he said.

“People who would have thought of themselves as homeowners 10 or 15 years ago are renting, and it’s a grim situation in a lot of places,” said Steve Berg, the vice president for programs and policy for the National Alliance to End Homelessness. “A lot of places don’t have a real grip of what the homeless population is in real time, and respond only crisis to crisis. But what we’ve learned about homelessness over many, many years is that you have to provide housing, and criminalizing the homeless doesn’t keep people off the streets at all.”

Earlier this year, the Los Angeles City Council approved an ordinance that lets the police confiscate property and makes it easier for them to clear sidewalks of homeless encampments. Similar legislation has been passed in other cities.

In Honolulu, where the city has spent the last two days shutting down homeless encampments that have irritated residents and frightened tourists, the American Civil Liberties Union of Hawaii filed a suit Tuesday against, arguing that it is unconstitutional to seize the homeless population’s food and other belongings.

Mr. Garcetti proposed using $12.6 million this year from unexpected tax revenue for rental subsidies for short-term housing and other services, including $1 million to create centers where the homeless could store belongings and shower. The $100 million, if approved, would be for the 2016 budget.

“It’s a humanitarian crisis and a moral shame,” said José Huizar, a council member who represents the area. “It has reached a critical breaking point, that the sea of despair that we witness on the streets of Los Angeles each and every day must end, and it begins with all of us here today.”