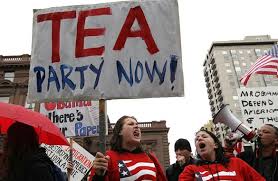 In keeping it fair, this downgrade is the fault of many, not just the Tea Party. It is partly the fault of the Democrats, including the President, who have not stood firm and fought hard enough on their values and what they know is right, both morally and economically. However, it is very true that this financial crisis comes about because of the fight and wants of the very few – a radical part of our political system that insists on benefiting the wealthy few without concern for the overall economy. A GOP who has been unwilling to compromise, but has set their entire focus on destroying the Obama 2012 campaign…at the expense of the entire national…and global…economy.

Obama: US will always be AAA-rated, despite downgrade

President Barack Obama said Monday that the United States will always be a AAA-rated country, responding to Standard & Poor’s decision late Friday to cut the long-term debt rating for the U.S. by one notch to AA+ from AAA.

Speaking on the downgrade issue at the White House Monday afternoon, Obama urged lawmakers to work together to tackle the nation’s deficit.

“We didn’t need a rating agency to tell us we need a balanced, long-term approach to deficit reduction,” he said. “My hope is that Friday’s news will give us a renewed sense of urgency.”

Standard & Poor’s Monday downgraded the credit ratings of dozens of U.S. government-related bond issues as officials for the rating agency continued to defend their actions, which caused stock markets to plunge around the world.

The agency lowered the formerly top-notch ratings on bonds issued by mortgage lenders Fannie Mae and Freddie Mac as well as farm lenders; long-term U.S. government-backed debt issued by 32 banks and credit unions; and three major clearinghouses, which are used to execute trades of stocks, bonds and options.

All the downgrades were from AAA to AA+. S&P says the agencies and banks all have debt that is exposed to economic volatility and a further downgrade of long-term U.S. debt.

The moves Monday followed S&P’s decision late Friday to cut the long-term debtrating for the U.S. by one notch to AA+ from AAA. Friday’s downgrade wasn’t unexpected, but it comes when investors are already feeling nervous about a weak U.S. economy, European debt problems and Japan’s recovery from its March earthquake.

“If you corrected the political settings that would certainly improve the credit standing,” he said. “But let’s not forget the damage that has been done to the credibility outside the United States about this debacle over raising the debt ceiling.”

He said it was “unimaginable” that the government came within 10 hours of having a major cash-flow crisis.

“This simply does not exist with other governments,” he said.

Chambers said that five countries had previously lost their AAA status and then subsequently regained it: Australia, Canada, Denmark, Finland and Sweden.

“All of them undertook significant fiscal reform that markedly reduced their level of debt to GDP,” he said.

Chambers said it took the five countries from nine to 18 years to regain AAA status.