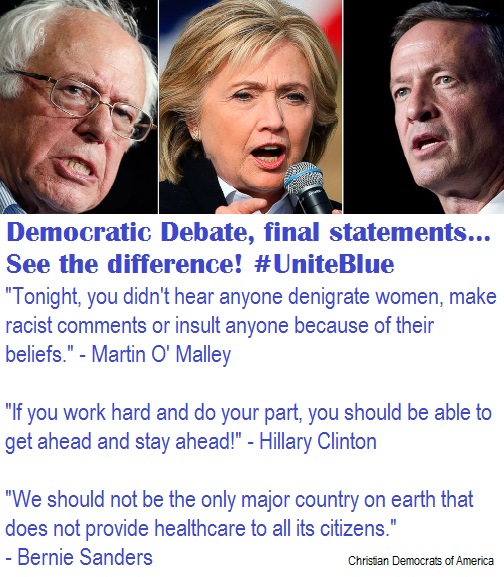 After four Republican debates – two “kids’ table” debates with the less popular candidates and two main-stage debates – America finally got to witness a realistic, adult debate about the issues last night. Without the antics, the Trump-factor and the extreme (or extremely offensive) rhetoric, it could be said by some that the first Democratic debate was less entertaining…but our country does not need more entertainment. We need real solutions to real problems. We need real families able to afford both food and rent. We need real solutions for the homeless crisis and income inequality. We need real immigration reform…and so much more. At one point Democrats were actually arguing about who will help the poor and vulnerable the most! The future presented at the Democratic debate was one we can fight for, and causes of real social justice.

“Listen to me, my people; hear me, my nation: Instruction will go out from me; my justice will become a light to the nations,” Isaiah 51:4.

Below is a great article outlining the “grown-up debate” from the New York Times.

The Grown-Ups Take the Stage at the Democratic Debate

It was impossible not to feel a sense of relief watching the Democratic debate after months dominated by the Republican circus of haters, ranters and that very special group of king killers in Congress. For those despairing about the future of American politics, here was proof that it doesn’t have to revolve around candidates who pride themselves on knowing nothing or believe that governing is all about destroying government.

Civility was a big winner on Tuesday night, and the discussion of real issues was refreshing. But what stood out most was the Democratic Party’s big tent, capable of containing a spectrum of reality-based views. All five candidates — including two refugees from what had been the Republican Party, Lincoln Chafee, a former Republican senator, and Jim Webb, secretary of the Navy in the Reagan administration — have real records. They also have real differences on important issues — national security, foreign policy, gun safety, financial reforms. Those differences illuminate the choices that have to be made in governing, some likely to be successful, some ineffective.

The debate probably won’t change much in the polling. Hillary Rodham Clinton reminded us why she’s the front-runner, with her experience, command of the issues and strength in communicating ideas. She seemed both at ease and fearless. It helped that the candidates actually valued time to discuss issues. One of the biggest applause lines was Senator Bernie Sanders’s quip to Mrs. Clinton, “the American people are sick and tired of hearing about your damn emails.” Supporters of Mr. Sanders embraced his passionate critiques, but his performance may not convert those skeptical of his ability to broaden his appeal.