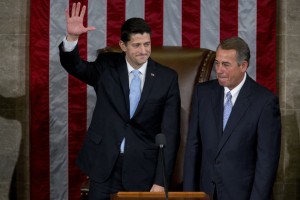 Below is a great summary of Paul Ryan and what kind of Speaker he could make. No one is questioning whether Ryan truly wants family time, cares about the poor and his faith, or wants to serve his country well as the new Speaker. But demanding your own family time while not supporting paid family leave for regular Americans…is shameful. Talking about caring for the poor and your faith but then proposing what was in the “Ryan budget” and would have dismantled social services and safety nets for the poor, does not reconcile. But we will hold out faith and optimism for now for Ryan. Let’s wait to see if he will be able to control the Far-Right wing and will compromise with Democrats, hopefully not allowing his Ayn Rand philosophies to bleed over into policy and governing…we can only pray.

The challenge of being Paul Ryan

Paul Ryan had excellent reasons for not wanting to be speaker of the House. He’s a smart guy and knows that the Republican caucus he is about to lead is nearly ungovernable. He’s been anointed as a savior, and saviors often meet a bad end.

Moreover, the Wisconsin native (and ardent Packers fan) is still very much a work in progress. He was happy to stay away from the center stage as he mapped out the next steps of his life and the direction of his thinking. As chairman of the Ways and Means Committee, he could pick his fights and choose the issues he wanted to highlight. As speaker, the issues will often pick him and he may well have to wage battles he might prefer to avoid.

On the one hand, he is, from my experience, a genuinely nice and warm person who wants to be seen as thoughtful, wonkish and willing to delve deeply into policy details. He’s a religious man who knows that his faith teaches the imperative of compassion and the urgency of justice. He has repeatedly given speeches declaring his determination to alleviate poverty.

But he is also an ideologue — one reason the right-wingers in the House could accept him as speaker. He has said that the unforgiving libertarianism of Ayn Rand — whose books include one called “The Virtue of Selfishness” — inspired him to enter politics. In a speech before the Heritage Foundation in 2011, he divided the world between “takers” and “makers” and spoke of government programs as creating “a hammock that ends up lulling people into lives of dependency and complacency.” I doubt that poor people think they spend their lives swaying gently between the trees.

Thus a hope: Ryan could use the first days of his speakership to signal his intention of bridging at least some of the great ideological gaps in our country. A man who so honorably values his own family could start by changing his mind on family leave.