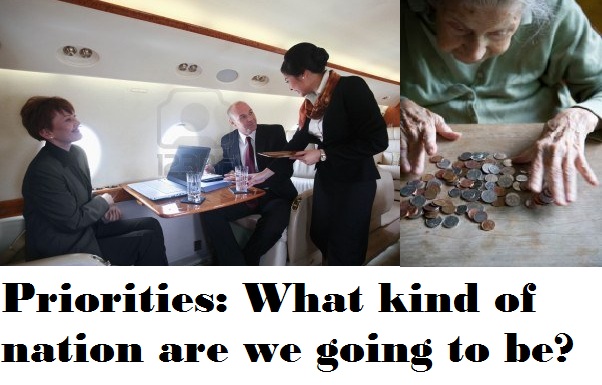 This morning we received news that the Senate has passed a “band-aid” fix for funding for the FAA to stop furloughs. It passed quickly and without argument. Amazing how fast they moved when it effected Congress and other powerful players in a personal way, via flight delays. The USA Today editorial posted below says: “As long as the cuts affected relatively powerless constituencies, few lawmakers seemed to care.” We couldn’t have said it better. There is no action when low income and housebound seniors are having to go without meals. There is no action when poor kids cannot get into head start. There is no action when cancer patients are cut from life-saving medical treatment! This fast movement on the part of Congress shows clearly where priorities are at, and shame on the Democrats who are supporting this. We pray President Obama does not sign this bill, but uses this as leverage to get a real deal passed, one that does not show we are a nation who cares only about inconvenience of the powerful or advantaged. If the obstructionists to a sequester fix have any fear of God whatsoever, let them heed carefully the following, from God’s own mouth…

Proverbs 17:5 “He who mocks the poor shows contempt for their maker; whoever gloats over disaster will not go unpunished.”

Proverbs 21:13 “If a man shuts his ears to the cry of the poor, he too will cry out and not be answered.”

Proverbs 22:16 “He who oppresses the poor to increase his wealth and he who gives gifts to the rich—both come to poverty.

Luke 11:40-42 “You foolish people! Did not the one who made the outside make the inside also? But give what is inside the dish to the poor, and everything will be clean for you. Woe to you pharisees, because you give God a tenth of your mint, rue and all other kinds of garden herbs, but you neglect justice and the love of God. You should have practiced the latter without leaving the former undone.”

These “bad air days,” as the New York Post dubbed them, began on Sunday, a slow travel day, and grew worse. On Wednesday, according to the Federal Aviation Administration, about 3,000 flights were delayed, 863 of them because of furloughs.

The staffing-related delays affected only about 3% of all flights, but they were galling for the passengers affected. Almost as galling were the reactions from some members of Congress who savaged the FAA for making the cuts, as if Congress had nothing to do with this mess.

“The FAA’s management of sequestration is quickly going from bad to worse,” said Rep. Bill Shuster, R-Pa., chairman of the House Transportation and Infrastructure Committee. “What else are you planning to do that you haven’t told us about?” Rep. Hal Rogers, head of the House Appropriations Committee, demanded of FAA chief Michael Huerta.

Rogers’ surprise seemed about as genuine as that of Capt. Renault in Casablanca, who announces at Rick’s that he is “shocked, shocked to find that gambling is going on in here,” moments before he accepts a pile of chips.

No members of Congress should be surprised at the havoc wrought by the sequester. After all, they caused it, and Transportation Secretary Ray LaHood repeatedly warned them about its consequences.

As long as the cuts affected relatively powerless constituencies, few lawmakers seemed to care. This week, though, it hit well-heeled executives who travel, the powerful airline industry, and two unions that represent FAA workers. Angry calls poured into the offices of lawmakers, who in turn started blaming everyone but themselves.

Truth is, the reason the nation is facing dumb, indiscriminate cuts is the inability of Congress and the White House to head off the sequester with a comprehensive budget deal. Now that the cuts are kicking in, whining about them is the height of hypocrisy.

The FAA insists that the sequester forces across-the-board cuts and that the agency has done everything possible to avoid delays. Republicans say that’s not true. It’s tough to sort out who’s right. This much is clear: Delays have affected 20% to 25% of daily flights this week, according to FlightAware.com, up from the typical 15%. Particularly hard hit have been Los Angeles International and the three New York area airports.

The solution to the sequester’s meat-axe approach is what it has always been: sensible, flexible cuts in domestic programs, accompanied by tax simplification and changes in the big benefit programs driving the nation’s deficits.

That doesn’t seem to be in the cards. On Friday, Congress approved a quick fix to end the controller furloughs. That will be a relief to harried fliers, but using gimmicks to patch problems as they arise is no way to run a railroad, an airline system or a government.