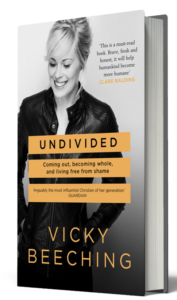 For many years now, I have received daily messages from people of all ages, in all areas of the country, who have been living under the oppression of religious peer-pressure. The message is so familiar I have it memorized at this point – their church, and many times family, support a very conservative brand of Christianity, and they cannot reconcile the teachings of the Jesus they know with the teachings of the Religious Right. They want to “come out” as a Christian Democrat, or at least as a Christian against Trumpism, but they fear the oppression that may ensue. Seeing as though I have also heard from hundreds of people who have taken that bold step to make themselves known, only to have been fired from church positions, lost relationships with family and sometimes even forced out of their local church…the risk is real.

I recently finished Vicky Beeching’s memoir, “Undivided.” In the book, Vicky Beeching gives an extensive look at her spiritual journey to arriving at the conclusion you can be a Christian and gay, going through the scriptures that reference homosexuality in the Bible and her own personal revelations between her and God. I won’t address those scriptures and revelations specifically in this article, but I encourage you to buy her book and read it, and also go to her website for more resources and Bible studies on the subject. But I do want to speak to the topic I have been addressing for the past 12 years – the church peer pressure, otherwise known as religious bondage, that has caused so much pain for LGBTQ Christians, for Christian Democrats, and anyone who does not fit the Religious Right mold of perceived outward “righteousness.’

Besides being one of the most vulnerable and well-written memoirs I have read, “Undivided” describes in perfect detail the progression of religious peer pressure. I will give you one spoiler: living under oppressive bondage for years can take its toll on even the most hopeful and optimistic souls. After following her story after she came out, and seeing as recent as the last few weeks the judgment and coldness of leaders in the church towards her, I see now more than ever how this grieves the heart of God to see His children, who are created in His image and He loves no differently than any other, treated in the way Vicky has been treated since coming out. Gay Christians have dealt with this kind of peer pressure until there is a breaking point at which many walk away from the faith, some stay all in and try to keep their identity a secret, and others face the ostracization of coming out and find a new family and religious community that will accept them.

As a pastor’s kid and grandkid who has worked in the church in some form or another since before I can even remember, the idea that anyone would need to ask if they are welcome in a church was a foreign concept to me until my early 20’s, when I began to get more involved in politics. That is when I realized there was no voice for people who are not spouting a message I saw as contrary to Jesus Christ in politics, and it is why I founded Christian Democrats of America. But I am one of the blessed ones, who grew up with a grandmother who founded our church and had a long career as an evangelist (a Pentecostal evangelist at that!) whose primary message was LOVE. My upbringing was in the Evangelical, Pentecost church but it centered on the love and character of Jesus, where the worst sin of all was considered to be hating another person. I have carried her wisdom, and the messages my parents carry on since she passed away in the early 2000’s, with me all these years and it is the foundation and driver of everything I believe and do. Jesus is synonymous with love and treating people with love. It is also synonymous with freedom.

Bondage was not the way of Jesus. The entire New Testament is literally a testament to freedom. He sets captives free, he does not imprison them. He points at the Pharisees with their great show of outward righteousness and he tells the people to not do what they do. He tells them to clean the inside of the dish instead of the outside. White-washed tombs is thrown in for good measure…

Matthew 23:4 They tie up heavy, cumbersome loads and put them on other people’s shoulders, but they themselves are not willing to lift a finger to move them…

Matthew 23: 27 “Woe to you, teachers of the law and Pharisees, you hypocrites! You are like whitewashed tombs, which look beautiful on the outside but on the inside are full of the bones of the dead and everything unclean. 28 In the same way, on the outside you appear to people as righteous but on the inside you are full of hypocrisy and wickedness.

The way of Jesus and the message of Jesus is in direct opposition to religious bondage, yet the great forces of the church continue to put this yoke that is not of God around the necks of so many people, strangling the life out of them. And what happens as a result? Exactly what scripture describes and warns – people walk away from the church and sometimes their faith. I recently spoke to a young man who told me if he had had the upbringing I had, or knew about a movement such as Christians Against Hate or Christian Democrats, he probably would not have left the church as an adult and converted to a different religion. Likewise, in our own church we have seen a dwindling of the congregation anytime inclusivity and love is preached – recently a congregation member simply walked out in the middle of a sermon my father was preaching about welcoming all people into the church! And I remember the constant pressure to give in to church peer pressure my grandmother was under for so many years – something she did not give in to, but it made growing a church difficult, at best. If conservative Evangelical Christians are looking at something to blame for the decline of seats in the pews, they need to look no further than in the mirror. And then they need to open their Bibles and allow God to expose them to His truth…

Acts 15:10 Now then, why do you try to test God by putting on the necks of Gentiles a yoke that neither we nor our ancestors have been able to bear?

Matthew 11:28-30 “Come to me, all you who are weary and burdened, and I will give you rest. Take my yoke upon you and learn from me, for I am gentle and humble in heart, and you will find rest for your souls. For my yoke is easy and my burden is light.”

We are in a time in our country when the Religious Right is not only putting the stranglehold of religious bondage onto their churches and members, but trying to use the government to do the same. Recently our Attorney General Jeff Sessions announced a “Religious Liberty Task Force” with coded language that indicates the “liberty” will certainly not include Christian Democrats or gay Christians, but allow a governmental support of discrimination against LGBTQ population. I want to encourage you, if you are a person in a red state or district, or surrounded by a community in which you feel the peer pressure, that you are not alone and you have an entire community here at CDA and in our various groups that will support you.

I will end with a few lines from one of my favorite Vicky Beeching songs, one that I heard her perform in concert years ago when I took my youth group to a Christian music festival. I introduced this song in worship to my church recently, and on our recent podcast I made mention of this line from the song that highlights MERCY. Mercy is an attribute of Christ not embraced by the most vocal right-wing Christians today, and this also grieves God’s heart. But we must, taking into consideration all these things, dwell on it all the more, speak out about it, and apply this great and wonderous concept of mercy and love into our values, and thus our politics as well.

“…undone by mercy, I’m left speechless. Staring wide-eyed at the cost. May I never lose the wonder, the wonder of the cross.”

– Wonder of the Cross 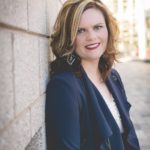