Why is America Cutting Emergency Food Aid in the Middle of a Famine?

This blog from Sojourners asks an important question about our values and how much of them we are willing to give up in the name of “cut, cap and balance.” Less than 1% of the budget goes to these programs that are up for a 75% cut…yet millions of lives are saved.

But at the same time, today Secretary Clinton announced 17 million in aid to Somalia. There are many who still care, deeply and are willing to fight for humanitarian and social justice efforts…which is why we are still blessed! 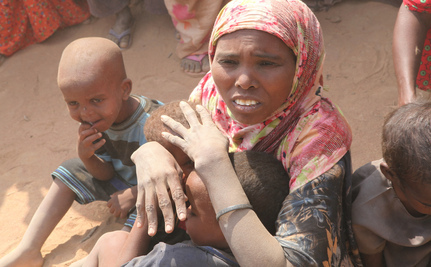 When I first visited Ethiopia at the height of the 1984 famine, I watched as twenty-four people died of starvation in less than fifteen minutes, right in front of my eyes. Barely five years into my career as a congressman, nothing my staff told me beforehand could have prepared me for what I saw on that trip.

Gasping at awful photographs of unspeakable human suffering is one thing; bearing firsthand witness to human suffering is another thing entirely. Glancing at a picture of a starving child in the newspaper, you can always turn away, but when you’re staring into the eyes of a mother who has just lost that child, it’s a completely different story. There’s no looking the other way.

That’s why I often describe those first Ethiopia experiences as my “converting ground” on issues of global hunger. What happened in Ethiopia changed me, and changed how an entire generation looks at hunger.

It’s also why I’m currently back on the Horn of Africa, reporting on the ground from the Dadaab refugee camp in eastern Kenya, less than fifty miles from the Somali border. And I am appealing to my affluent brothers and sisters in the United Stated and around the world not to look away. We need your help.

The worst drought in sixty years has struck the continent, putting over 12 million people at risk of serious malnutrition, starvation and even death.According to USAID, more than 500,000 Somalis have already fled the worst areas of their country, seeking food and water across the border in neighboring Kenya and Ethiopia.

Today at the Dadaab camp, I met a husband and wife and their six children who have spent the last two months walking hundreds of miles from their home in Somalia. They arrived with nothing but the clothes on their back. They’ve made this tremendous sacrifice for one simple reason: They want to live. Dadaab gives them that hope.

Meanwhile, back in Washington, D.C. some of America’s political leaders are considering budget cuts that would make it all but impossible for us to respond to crises like these in the future. The U.S. House of Representatives already voted on a budget proposal for FY2012 cutting emergency food aid by seventy-five percent compared with FY2008 levels. If enacted, these cuts will decrease America’s commitment to addressing global hunger from thirty percent of the current global total need to less than fifteen percent.

In my former role as the U.S. Ambassador to the U.N. World Food Program, I visited dozens of refugee camps in crisis zones all over the world, and Dadaab is the best run camp I have ever seen. It’s clear that the money that the U.S. has spent on this crisis so far is being used well. We have actually learned and improved since 1984, but if we pull back now all of this is at risk. Now is not the time for deep cuts to emergency food aid.

The proposed cuts ignore the low-cost of these life-saving programs; U.S. foreign aid spending is less than one percent of the total budget. They also ignore broad bipartisan support these programs have shared in recent decades; President George W. Bush actually increased funding for international feeding programs. Moreover, these cuts would undermine our national security; hungry people either migrate, revolt or die, all three of which create extreme instability. Finally, and most importantly, these cuts violate the basic moral principle that we should not harm the most vulnerable people in the world in their moment of greatest need.

I walked away from my first trip to Ethiopia with the conviction that, though we live in a great nation, for everything we were doing to address the crisis our efforts were not enough. They weren’t enough to save those twenty-four people I watched die. They weren’t enough for that mother and her child. America needed to do more, not less. Bearing witness to what’s currently happening on the Horn of Africa, I still feel this way.

The actions of some Washington politicians beg the obvious question: Why are they cutting funding for emergency food aid in the middle of a famine?  In 1984, people of faith and conscience said “never again”. It’s time for America to start living up to this promise.

Ambassador Tony P. Hall is a leading advocate for hunger relief programs and improving human rights conditions in the world. Tony Hall retired from official diplomatic service in April, 2006, and is currently serving as the executive director of the Alliance to End Hunger which engages diverse institutions in building the public and political will to end hunger at home and abroad. The Alliance has more than 75 members: corporations, nonprofit groups, universities, individuals, and Christian, Jewish, and Muslim religious bodies.