Putting “the neighbor” above myself 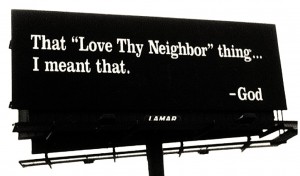 When we vote, we often vote our self-interest. If you’re a woman, you probably want equal pay for equal work and reproductive freedom – so you vote for the candidate who will give it to you. Perhaps you’re a worker – and want the minimum wage to be raised. You vote for the person who seems to care about workers. You have a pre-existing condition, and you vote for who you think will vote for a health care plan that will protect you.

This year, I find myself in a different position than usual. Much of the discussions are about issues that may not directly affect me. I’m over 65, on Social Security and Medicare, so chances are, Trumpcare won’t affect me the same it would for millions of others. Whatever the Republicans do to my social security might not kick in for some years – so maybe they can’t hurt me at this point in my life. I’m not an immigrant, or from the Middle East. I’m a Christian, not a Muslim, so the travel ban won’t affect me. I’m over child-bearing age, so policies about abortion won’t affect me.  I work for myself – whatever happens to the minimum wage probably isn’t going to make a difference in my life. I’m a homeowner with a fixed mortgage rate – perhaps housing laws won’t make a direct difference. I’m white – so all the racism in the government may not make much difference in my life.

But this year – my thoughts are not about my rights. They are about the rights of others. They’re about “the other” that might be very different than me, but I deeply care about their situation. They seem to un-cared for by the government that is supposed to care, and protect, our welfare.  I’m concerned about my friend who is 60, who could be drastically affected by health care change. I care about a transgender person who is becoming a friend – because I think of the suffering and oppression she’s going through – with no care or concern from this government. I care about the person who works behind the counter who is struggling and is on minimum wage. And about the woman who might be in the same position as several friends of mine in the past – there was a problem during pregnancy and the doctor recommended an abortion.If Republicans had their way, they would decide each woman’s fate. I care about the people who now are dependent on Medicaid, like my sister was before she died from ALS.

I care about my neighbor – wherever and whoever they might be. That is supposed to define us as a compassionate nation –  a Christian/Jewish/Muslim/Hindu/other faiths nation, who is, according to all our religions, supposed to care about the “neighbor.” What a shame, that we, as a nation, have lost the light! That’s why we as Christian Democrats must stand up and make our voice heard for every neighbor now as never before.

Join our movement and help us stand up for “the neighbor.”

Dr. Linda Seger is a member of the Christian Democrats of America advisory board and author of Jesus Rode a Donkey: Why Millions of Christians Are Democrats.