Gov. Jan Brewer once again shows a stand of no-mercy and no-compassion towards undocumented immigrants, and today’s executive order to bar President Obama’s executive order ought to show just where the values are. Poll after poll shows that the great majority of  Americans support this act by President Obama and support an even more permanent law such as the Dream Act, yet Governor Brewer is more concerned about pleasing the extremists of AZ than seeing hope and real solutions for these millions of young people.

Lev. 19: 33-34
“When an alien lives with you in your land, do not mistreat him. The alien living with you must be treated as one of your native-born. Love him as yourself, for you were aliens in egypt. I am the Lord your God.” 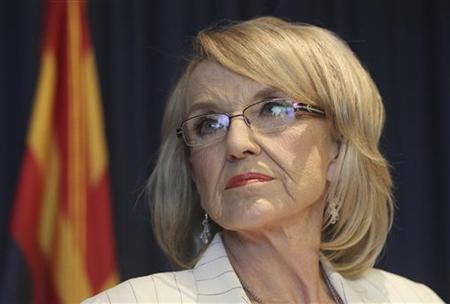 Arizona Republican Governor Jan Brewer, in yet another clash with the White House, issued an order on Wednesday barring illegal immigrants who qualify for temporary legal status in the United States from receiving any state or local public benefits.

The action was a response to relaxed deportation rules issued by the Obama administration on Wednesday.

Brewer, whose state has been at the center of the country’s immigration debate, issued an executive order denying state or local benefits to immigrants applying under the new federal immigration rules. The order would bar them from obtaining an Arizona driver’s license or a state-issued identification card.

As many as 1.7 million people could qualify for the temporary federal program, which enables certain illegal immigrants to apply for work permits, Social Security cards and driver’s licenses, according to the Pew Hispanic Center.