What Is “Christian Power”? A Response to NYT article “Christianity Will Have Power” 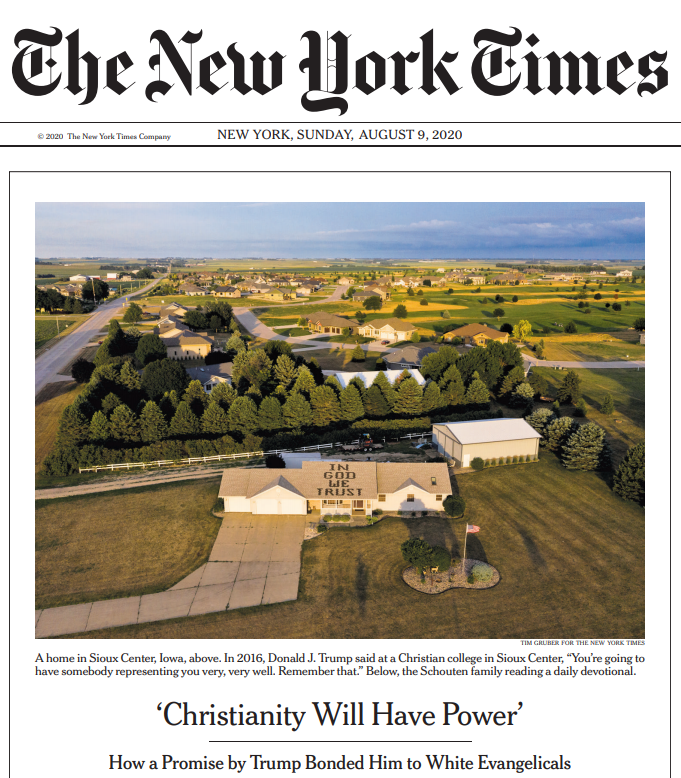 “For yours is the kingdom and the power and the glory for ever and ever, amen.”

The New York Times recently collected and aired the grievances of a small conservative town in the Midwest.  The overwhelming sentiment of this town was that their “way of life” and “religion” were “under attack.”  When pressed for specificity, they dropped some real knowledge bombs on us such as high divorce rates, whether or not they have to lock their doors, the possibility that someone might “make” them hire a gay person, and Hispanics moving there. Don’t get me wrong, they love the Mexicans who work 12-hour days for a low wage, as long as they don’t live in the neighborhood. They even let one of them use their church to hold a Spanish sermon (after-hours so as not to, you know, mix too much).  They seem to be backing Trump because he is “fighting for them” so they don’t lose their “way of life.”

Now, anyone not inside that particular bubble has been asking the question:  What has he done to “fight for you”?  He has separated children of immigrants at the border, assaulted the citizenry protesting, proclaimed – in church, mind you – that he won’t ask God for forgiveness, made his money from casinos, been married multiple times, and the list really, really does go on, but that isn’t really the point, is it?  You see, this small community of Trump loving voters are single issue voters: they vote for the people who hate the same people they hate.  So, when Trump glides down the “golden escalator” and proclaims that MS-13 (oh, did you forget about the prison gang that was going to storm the gates and begin all manner of ridiculousness in the streets of America?) was coming and Mexico was “sending” them and they were “rapists and murderers,” that was all they needed to hear.

These are all lies that were easy to swallow since they had already been in the works. Fox News propagandists (which I really think is too light of a word at this point) like repeated accused sexual assaulter, Bill O’Reilly, Laura “Shut up and Dribble” Ingraham and Judge Janine Pirro had been shouting them through the TV for years.  Bill O’Reilly had to suddenly retire because some of his victims finally spoke out.  But at Fox News the bench is deep with racism, hate and fear.  He was promptly replaced by Tucker Carlson who has dedicated the last few years of his career to just fueling these perceived grievances from right inside their televisions, radios, streams to their phones and wherever else FEAR is sold.  He has told them that black men kneeling for justice in the NFL was wrong, and scary.  He told them that Democrats were obviously coming for their guns because there is no gray area between curbing mass shootings in schools and taking the shotgun that comes out only to shoot birds picking at your fields twice a year.  He says “illegals” are “pouring” into our country and gives no context that they are fleeing for their lives.  No, instead he stokes the FEAR of towns just like this small Midwest town.  He promotes their fears, gives them credibility by manufacturing a problem based on stereotypes.

This response isn’t really even about the particular issues.  There are many.   It is to refute the idea that this is in any way a “Christian” point of view.  It is not.  Christians do not lack power, political or otherwise.  They are not being persecuted in this country in any way.  Leaving your doors unlocked is not a Christian Value.  Standing against LGBTQ people having a job is not a Christian Value.  I think of the values, the reason, the salvation that I needed when I became a Christian and I see none of what these folks are talking about.  I read my Bible and I see none of what they talk about.  These same people have built our organization for us.  Through their actions, opinions, and application of faulty religion and reasoning, they have isolated themselves and blame everyone else for being alone.  By their actions pews are emptying by the thousands, looking for the truth they know is out there, but being missed by these folks.  We happily bring them in with a message of love directly opposed to what they are conditioned to.

Many come conditioned to the harsh practices, anger and FEAR these same “Christians” apply to situations. Most are taught to be angry when the world doesn’t conform to their ways. They are silo-ed from the real world all alone in their Fox News bubble where there are lots of scary Democrats out there and no other message opposing that narrative.  This is how the manipulation train has run wild in areas like this.

Why, then do we choose a message of love?  I would just like to submit some scripture for their consideration.  Something from the Book of James, chapter 4:

7 Submit yourselves, then, to God. Resist the devil, and he will flee from you. 8 Come near to God and he will come near to you. Wash your hands, you sinners, and purify your hearts, you double-minded. 9 Grieve, mourn and wail. Change your laughter to mourning and your joy to gloom. 10 Humble yourselves before the Lord, and he will lift you up. 11 Brothers and sisters, do not slander one another. Anyone who speaks against a brother or sister or judges them speaks against the law and judges it. When you judge the law, you are not keeping it, but sitting in judgment on it. 12 There is only one Lawgiver and Judge, the one who is able to save and destroy. But you—who are you to judge your neighbor?

This passage cuts to the core of Christianity.  It talks about where “Christian Power” comes from, and shock of shocks, it isn’t Trump, Republicans, parties, nations, the Supreme Court or anything even on earth.  A Christian’s power comes from Christ.  It also warns against being the judge of the law, because when you do, you are not keeping it.  Thus, in not keeping the law, by trying to judge it, you risk sin.  So with planks in their eyes they unwaveringly believe that their anger and fear is justified.  So they lash out, or agree with those lashing out on their prime time television, and allow themselves to be goaded and cajoled into their metathesiophobia (the irrational fear of change).  It is in this state of mind that Trump walked in:

The religious right is incensed!  Conservative Christians are currently the victims and their way of life is eroding.  Constantly under attack by homosexuality, Mexicans, DACA recipients, BLM protests, and not near enough fealty for their very own “Golden Calf”!  It was all caused by the Democrats, of course, because (pick only ONE per issue) They are COWARDS!!, They are LAZY!!!, They are BULLIES!, and, just on the regular, be sure to sprinkle in THEY ARE COMMUNIST, HATE AMERICA, ARE UN-AMERICAN, AND STEALING YOUR RELIGION!!! and THEY HATE GOD!!!  There are couples getting divorced, women becoming couples, MEN BECOMING COUPLES! And if all that weren’t enough to be incensed about, just imagine – HORROR OF HORRORS!, GASP!!! CLUTCH PEARLS!!! – now these religious right zealots, “rock ribbed conservatives” that love their guns so that they can “protect” themselves are having to LOCK THEIR OWN CARS!?  WHEN WILL IT END?  FRENZY, FEAR, MASS HYSTERIA, CARAVANS, BENGHAZI (INSERT A STILL SHOT OF ALEX JONES’ RED FACED RANT) AHHHHHHHH!

Justin Anderson is the Multi-Media Manager and contributor to Christian Democrats of America and also the co-host of the What Would Jesus Pod? Podcast.  Follow him on Twitter @newman4life. Be sure to subscribe and donate to further the message of love!