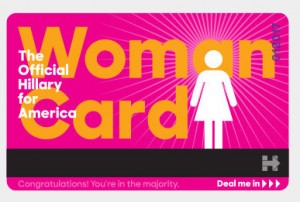 When it comes to equal rights and equal respect for women, it’s so important for Christians to play “The Woman Card.” What does this mean? It means understanding how Jesus was the first to break sexist stereotypes and following His lead to help women succeed across the globe.

There are many examples in the Bible of Jesus breaking all kinds of typecasts of women. Did you know that Jesus talked to the women at the well in Samaria? So what? It’s important, because men didn’t talk to women, and especially a known adulteress (seven husbands – and not all of them “husbands”). Jews hated Samaritans, but he treated her with respect – for her and for her intelligence. It shocked his disciples.

Women, including Mary Magdalene, traveled around the countryside with Jesus and his 12 apostles. These women provided the means for his ministry. There was consistent dialogue between men and women at the time, which was almost unheard of in those days. Jesus respected Mary, Martha’s sister, who listened and talked to him, even though she wasn’t doing the serving role of her sister, Martha. “She has chosen the better part,” Jesus said. When Jesus died, Mary Magdalene continued his message and was one of his most influential followers and evangelists.

Women were the first who testified that Jesus had risen. They’re the ones who told the other disciples what had happened. Yet at the time women had no witness or legal authority. Breaking sexist stereotypes in this century can only happen when we follow Jesus’ lead and play “The Woman Card.”

By Dr. Linda Seger, author of Jesus Rode a Donkey:  Why Millions of
Christians Are Democrats (4th Edition)

Note:  Jesus Rode a Donkey:  Why Millions of Christians Are Democrats (4th
Edition) is available on Amazon and Barnes & Noble’s website

LINDA SEGER, Th.D, a theologian, author and speaker with degrees in English, Drama and Theology. She comes from a long line of Lutherans who were theologians, ministers and missionaries. She’s a Christian, Quaker, a Democrat and lives in Cascade, Colorado. Author of Jesus Rode A Donkey: Why Millions of Christians Are Democrats. 5th Edition release: Date June 2, 2020