Christian Against Trump…Christians Against Hate 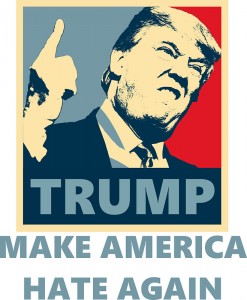 The vitriol, anger and hate in our country has reached a new proportion and it is time for it to stop. We must stand up and tell the world that a majority of Christians in this country who are following the teachings of Christ have had enough – it is time to stop the hate. From the scapegoating and marginalization of immigrants to the hateful rhetoric against LGBT by some so-called Christians on the extreme Far Right, from banning people from our country on the basis of religion to belittling the poor and people on government assistance, we have had enough of hate speech, hate-infused policy proposals and plain and simple hateful attitudes. These are all things that are against the basic tenants of Christianity, as we see in…

Matthew 22:36-40 “Teacher, which is the most important commandment in the law of Moses?” Jesus replied, “‘You must love the Lord your God with all your heart, all your soul, and all your mind.’This is the first and greatest commandment. A second is equally important: ‘Love your neighbor as yourself.’ The entire law and all the demands of the prophets are based on these two commandments.”

1 John 3:11 For this is the message you heard from the beginning: We should love one another…14 We know that we have passed from death to life, because we love each other. Anyone who does not love remains in death. 15 Anyone who hates a brother or sister is a murderer, and you know that no murderer has eternal life residing in him.

John 13:35 “By this everyone will know that you are my disciples, if you love one another.”

We invite Christian Republicans to join us and anyone who shares these values – this is not about politics or partisanship, it is about taking a stand as children of God and saying enough is enough. Love casts out all fear. We have to decide this is not going to happen in our country – we are not going to accept it. We are going to stand up for true Christian values, and call out racism, prejudice, sexism, violence, rudeness as principles that are not Christ-like! This isn’t only about Trump, which is why this movement extends beyond the 2016 campaign. Disrespect, violence, threats of violence, belittling the poor, minorities, sexism, homophobia and Islamophobia is not OK, not Christian, not like Jesus and not acceptable from a candidate running for President of the United States.