A Word for Christians Who Want to Make America Great Again 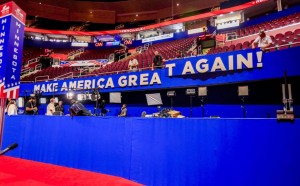 A Word for Christians Who Want to Make America Great Again

Over the past week at the Republican National Convention we have heard the word “great” more times than I could count. We heard pastors, religious leaders and Christians repeat the Trump slogan, “We will make America great again,” and wildly applaud as he gave his acceptance speech, all themed around how bad things are now but how great they will be with him in charge.  However, what is the Trump/GOP definition of “great”? Ever since Trump first announced his candidacy and campaign slogan, I have been questioning what he means by “great.” If you want to make a country great again, then you obviously don’t believe it is great now – a very negative point of view for any candidate for President, but judging from Trump’s RNC acceptance speech and the reaction, it is a popular stance to take this year. As a person who has been a follower of Christ and involved in ministry on some level most of my life, it is important for me to fully understand what “great” means in Biblical terms, and I would also think this would be pretty important for most Christians.

We don’t always have a clear definition of a word in Biblical terms, however, Jesus addressed “great” very directly. He showed by example and taught exactly what characteristics we should value and consider “great.” Last I checked the word “Christian” literally means “follower of Christ.” His are the values we are supposed to be embracing, and He told us exactly what it means to make something or someone “great.”  In Mark 10:35-45, we have an account of James and John asking for more power and authority. They wanted to be given a place at God’s right-hand in heaven, which is probably the highest power-position anyone has asked for (unless it is to be God Himself!). When the other disciples are indignant that they would ask this, Jesus told them greatness is measured by the scale of service and humility. He instructs that to be the greatest actually means to become lowly and centered on serving others, and this is not the only account of Christ’s very specific teaching on this.

He washed the feet of his disciples as an example of leadership. In Matthew 23:11-12 He says the one who wants to be greatest must be the biggest servant of all and that anyone who humbles themselves will be exalted. He tells the rich young ruler that he should sell what he has and give it to the poor. Jesus was not saying every successful, rich or powerful person should give up having authority and sell all their possessions, but He spoke in parables and in examples that we could easily understand. By doing this He gets a strong point across about values and also characteristics that should be valued. He makes it clear what is and is not a “great” attitude.

So if you are a Christian who truly wants America to be great, and have decided to support or are considering supporting Trump, please consider this: Have you asked yourself if your definition of greatness, as defined by Christ, is the same as Trump’s definition? When you compare the examples above with the display we saw at the RNC – where the biggest unifying voice on any topic was one of hatred and contempt for the opposing party and their nominee, with the delegates and surrogates cursing, even threatening, Hillary Clinton – the answer is obvious. When did we see and hear a true call to service, kindness, hope or love? The things Jesus would consider “making a country great” is the polar opposite of everything the GOP has put forward. First of all, a culture that is centered on unifying around hatefulness and anger is just about as anti-Christ as it can get. Consider this last, and probably most important, “great” that Jesus spoke of…

Matthew 22:36-40 “Teacher, which is the most important commandment in the law of Moses?” Jesus replied, “‘You must love the Lord your God with all your heart, all your soul, and all your mind.’ This is the first and greatest commandment. A second is equally important: ‘Love your neighbor as yourself.’ The entire law and all the demands of the prophets are based on these two commandments.”

Think about this for a minute. Christ is asked what the most important commandment is…with all His power and authority, He has a moment to tell those listening and those testing Him the answer to a question for the ages. His declaration is one of the most important and powerful statements ever made: LOVE. Love God, love your neighbor. His challengers then proceed to question who “neighbor” really is. When He uses a Samaritan as His example, He truly put to rest all arguments anyone in history would ever try to make about “neighbor” referring to only those within one’s own race, background, fellowship, religion, etc. This is because Samaritans were not socially accepted – they were considered “aliens” in every way and one of the lowest of social statuses.

When you believe Jesus is truly the Son of God, you must also believe this declaration is pretty important and not something that can be brushed under the rug. However, what Jesus says is the most powerful and important thing is not valued, at least not in word or action, by the Trump campaign and the current GOP, which is evident after the RNC 2016 Convention. Power and strength are seen as defeating, pushing others aside, dividing and conquering, insulting those who come against you and bullying your way to the top – putting up walls and making sure no one takes advantage of us or gets too much help or mercy. But as a follower of Christ, I cannot concede that anything but what my Lord declared is the greatest thing is what we should do – LOVE. To deny any other way but love is to deny Christ. He even said to love our enemies and He loved those who denied Him. However, the thing that He said is especially harmful is to deny Him and everything He said was most important, thus denying His very power and authority, yet still claim to embrace Him.

Here is the thing….you cannot embrace something you completely stand against. Have you ever tried to touch two magnets together? They are polarized. They reject and repel each other. Well, that is how it is when people try to embrace Jesus yet reject Him, His commands and His greatness. Instead they are replacing His power with a false trust in earthly power – money, guns, control and hate.

This week I was about to indulge in a frozen yogurt on a hot summer day and as I was stepping up to order the man in line before me was getting very anxious and upset at the cashier, saying his order was wrong. She had apparently heard his order wrong and he could not understand her well – she had a Mexican accent and dark skin. He angrily told the manager she couldn’t speak English. Finally as his order was fulfilled, I apologized to the woman on behalf of all decent human beings in America, and saw the tears of hurt in her eyes. The Trump culture has validated this type of heated rhetoric and brought it to a boiling point, so that it is acceptable to openly discriminate. Is this what being great means? That we can say anything, be politically incorrect to the point of it being acceptable to openly tear other people down because they look or sound or believe differently than we do?  Is “greatness” revitalizing the torture program, discriminating on the basis of religion, separating families because our laws were so messed up they couldn’t come here legally 15 years ago? Is it chanting “lock her up” about your political opponent, calling the opposing party candidate denigrating, sexist names? Is it inciting racism, violence, bullying your way to the top? And finally, is “greatness” giving more power, wealth, tax breaks to the wealthy while putting a harder burden on the poor, middle class? Is the “again” referring to a time before we had a social safety net at all?

If Christians truly want to make America greater, they would be calling for policies that make things easier on the hurting, oppressed populations, the poor, the homeless, poor neighborhoods and schools. They would focus their attentions on the things Jesus did, on answering the questions: how much love can we pour out here? How much acceptance can we give out there? What policies and what person or party is doing the most to take the burden off the poor and those who are vulnerable? Who is accepting of the poor wanderer, immigrant and does not want to separate families? Who wants to make sure more people who can’t afford healthcare can get it, who can’t afford food can get it? Who is offering some realistic options on ending injustice and suffering, offering more mercy to the prisoners?

One final word about Biblical greatness I will leave you with. In Isaiah 58, we find the description of a great nation and how a society becomes great. It talks about things like justice for the poor and oppressed, removing the hindrances to the poor, paying workers a fair wage. It even mentions providing the immigrant with shelter! Taking this into consideration, I pray, my fellow brothers and sisters, that we may be truly great as a nation, and that Christians in this nation will rise up and embrace the things the One they are following says are GREAT!

“Shout it aloud, do not hold back.
Raise your voice like a trumpet.
Declare to my people their rebellion
and to the descendants of Jacob their sins.
2 For day after day they seek me out;
they seem eager to know my ways,
as if they were a nation that does what is right
and has not forsaken the commands of its God.
They ask me for just decisions
and seem eager for God to come near them.
3 ‘Why have we fasted,’ they say,
‘and you have not seen it?
Why have we humbled ourselves,
and you have not noticed?’

“Yet on the day of your fasting, you do as you please
and exploit all your workers.
4 Your fasting ends in quarreling and strife,
and in striking each other with wicked fists.
You cannot fast as you do today
and expect your voice to be heard on high.
5 Is this the kind of fast I have chosen,
only a day for people to humble themselves?
Is it only for bowing one’s head like a reed
and for lying in sackcloth and ashes?
Is that what you call a fast,
a day acceptable to the Lord?

6 “Is not this the kind of fasting I have chosen:
to loose the chains of injustice

Christina Forrester is Founder and Director of Christian Democrats of America, a social justice advocate, singer/songwriter, social media consultant, dog-lover and one of those millennials you were warned about. Follow her @Christinaof9.