The State of the Divide In Our Union

Last night President Obama laid out his vision for the country and our political process. It was reminiscent of his early days as President and first presidential campaign, when he presented his vision of hope and change. Unfortunately our politics have become more partisan over the last seven years despite his efforts. Our country is divided and in some areas divided to the extreme, as many Americans choose their “side” and Republican candidates fight over who can be the most radical and farthest to the Right.

But the final mome 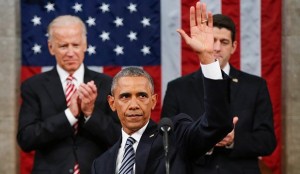 nts of President Obama’s address and the surprising Republican  response may give us some hope that the willingness to cooperate, or at least treat each other with respect, is possible. In the past few years following the State of the Union, we have gotten the far-right Republican response discounting everything President Obama said, a Tea-Party response more radical than the Republican response, and sometimes a Libertarian response from Rand Paul. The tone has been combative and accusatory of the Obama presidency and towards Democrats in general. And even though Nikki Haley’s Republican response reflected many policies that would not be good for our country and discounted the achievements of the Obama presidency, there was respect and…gasp…an admission of fault on the part of the GOP for creating more partisan-ism and disunity in our politics. That one caught us all off guard, as did the comments of welcoming all people regardless of race and religion. There was a call to unity in our country and even a recognition that President Obama has been an inspiring figure.

Political pundits are saying the President and Nikki Haley were both making in some ways a joint statement against Trumpism. Wouldn’t it be funny if it took the radical rhetoric of Donald Trump to bring both parties together in agreement on the basic elements of working together, mutual respect and compromise? On Thursday, January 14th, CDA founder Christina Forrester will be featured in a news story on the 700 Club about compromising on abortion. We were surprised that the conservative Christian program wanted to talk with Christian Democrats, but they did, and they put together a balanced story on what it means to compromise across the aisle. If we could actually get the majority in the middle to come together on the heated pro-life/pro-choice topic, think what we can do on other issues! By taking out the accusatory language and really listening, respecting and cooperating, there is so much we can do as a country…starting this week, maybe we as Christian Democrats in America can help lead that charge.

You can watch the 700 Club feature on Thursday, January 14th on ABC Family, check your local listings for times, or watch it now here: Why the Abortion Divide Is Smaller Than You Think.

Towards the end of his address, the President made these remarks, which probably sum up the call to unity…

So, my fellow Americans, whatever you may believe, whether you prefer one party or no party, whether you supported my agenda or fought as hard as you could against it — our collective futures depends on your willingness to uphold your duties as a citizen. To vote. To speak out. To stand up for others, especially the weak, especially the vulnerable, knowing that each of us is only here because somebody, somewhere, stood up for us. We need every American to stay active in our public life — and not just during election time — so that our public life reflects the goodness and the decency that I see in the American people every single day.

It is not easy. Our brand of democracy is hard. But I can promise that a little over a year from now, when I no longer hold this office, I will be right there with you as a citizen, inspired by those voices of fairness and vision, of grit and good humor and kindness that helped America travel so far. Voices that help us see ourselves not, first and foremost, as black or white, or Asian or Latino, not as gay or straight, immigrant or native born, not as Democrat or Republican, but as Americans first, bound by a common creed. Voices Dr. King believed would have the final word — voices of unarmed truth and unconditional love. (Source: https://www.whitehouse.gov/the-press-office/2016/01/12/remarks-president-barack-obama-%E2%80%93-prepared-delivery-state-union-address)