Republicans Rob Americans While They Sleep 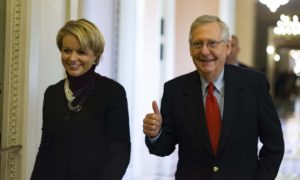 Bill passed in early hours of Saturday will benefit big businesses and the wealthy, and give Donald Trump his first major legislative victory

Late on Friday night west coast, early hours of the morning East Coast, on a day when the former National Security Adviser plead guilty to lying to the FBI and high-level members of the President’s cabinet, including the President himself, are potentially on watch for the next shoe to drop in Mueller’s Russia probe, the GOP robs the American people in the biggest tax scam bill ever. The Republicans obviously have no shame whatsoever, and are willing to do anything to get their billionaire donors another tax cut at the expense of the national debt, the poor and middle class. We cannot blame this one on Trump – it is on the Republican party, a party of distorted truths and values. If they were truly proud of this piece of legislation, they would have done this in the full light of day during the week.  We must remember and replace them in 2018.

Senate Republicans have passed a sweeping overhaul of the US tax code that will bestow huge tax cuts on US corporations and the wealthiest Americans, nudging Donald Trump one step closer to achieving the first legislative victory of his presidency.

The Senate passed the tax bill in a 51-49 vote in the early hours of Saturday morning after scrambling to rewrite major pieces of the legislation on Friday night. Lawmakers receieved the nearly 500-page bill, some of it handwritten, hours before they voted on the sprawling tax plan that will affect nearly every US business and taxpayer. Only one Republican, Senator Bob Corker, voted against the bill.

The vote marked a significant feat for Republicans, who suffered a series of embarrassing blows earlier this year by failing on multiple occasions to repeal and replace the Affordable Care Act amid opposition within their own party. Trump and Republicans in Washington subsequently staked their political fortunes on the hope that tax reform would not suffer the same fate as healthcare.

The rush to pass a tax overhaul before the end of the week sparked outcry from Democrats, who said it would be impossible to fully digest the legislation before voting began.

“I defy any member of the Senate to stand here, take an oath that they have read this and understand what in the world it means to businesses and families and individuals,” said Senator Dick Durbin, the minority whip from Illinois, holding up page notes scribbled in the margin.

Full story from the Guardian