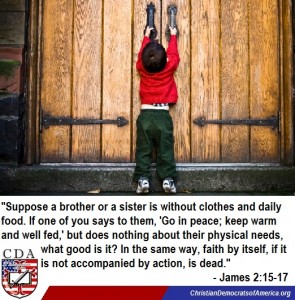 In the aftermath of yet another tragic shooting in America, we have seen a huge backlash to the usually acceptable “thoughts and prayers” sentiment made by politicians. Most of the Republican presidential candidates tweeted basically the same thing – thoughts and prayers are with the victims and their families, etc. We also sent out a tweet calling for prayer for San Bernardino – something we do not take lightly but see as an important call to action for our members, followers, and the nation. We also offered a call to action on gun violence, as did Hillary Clinton who offered her prayers, and also made a strong call to action to stop gun violence. But articles like the one from MSNBC.com have highlighted the “righteous indignation” directed at those who have made continual sentiments such as this in these crises, yet refused to act on measure to prevent gun violence. And how can anyone look at the statistics, see the mass murders and the daily murders and accidents caused by our lack of regulation and simple steps that could be taken right now to help stop this violence….and not do something about it?

Now, we would be the last ones to say prayer isn’t important. It is! There is a reason we see a community of people come together in prayer for one thing or another, because it works! It gives us peace, it gives us something we can actually do when we are powerless and looking on at the terrible things happening. It is our connection to God. But there is another side to prayer that the Bible indicates as just as important….taking action.

Jesus said that praying just to be seen and heard and look good is meaningless or worse. That’s from Jesus, not secular liberals. James also said that faith without works is dead. There is a balance all throughout the Word of God pointing us to a way of living that focuses on faith and prayer AND works, good deeds, action. Prayer is always coupled with action when possible, and prayer is also very specific, not simply an empty wish. So while we cannot ever say prayer is useless, or that the Republican candidates who tweeted their prayers for victims, that their prayers are not important or sincere, but there is a time where we must put feet to our faith and action to our prayers. God requires this of us, and anyone claiming to be a follower of Christ will know this full well.

If someone comes to your door thirsty or hungry, would Jesus say to just give them a hug and say, “I’ll be praying for you!” and shut the door while they thirst and starve? Would it be meaningful or God’s will for a preacher to stand in front of a person dying of a curable disease, holding the antidote for their illness in their hands, yet saying instead, “I won’t give you this medicine because I’m against it, but I am praying and thinking of you right now”? If it is in our power to act, for justice, for those hurting, in need, then we must act – we must pray for wisdom in how to act, pray for strength in acting and pray that the results of our action work. We must pray AND act! So the question to politicians who are freely giving their prayers would rightly be: “Thank you for your prayers, but have you prayed for action? Have you done all you can do to stand, to fight for justice? Or are you standing at the door refusing to make a sandwich while hundreds of innocents are starving?”

James 2:14 What good is it, my brothers and sisters, if someone claims to have faith but has no deeds? Can such faith save them? 15 Suppose a brother or a sister is without clothes and daily food. 16 If one of you says to them, “Go in peace; keep warm and well fed,” but does nothing about their physical needs, what good is it? 17 In the same way, faith by itself, if it is not accompanied by action, is dead. 18 But someone will say, “You have faith; I have deeds.” Show me your faith without deeds, and I will show you my faith by my deeds.19 You believe that there is one God. Good! Even the demons believe that—and shudder. 20 You foolish person, do you want evidence that faith without deeds is useless? 21 Was not our father Abraham considered righteous for what he did when he offered his son Isaac on the altar? 22 You see that his faith and his actions were working together, and his faith was made complete by what he did. 23 And the scripture was fulfilled that says, “Abraham believed God, and it was credited to him as righteousness,” and he was called God’s friend. 24 You see that a person is considered righteous by what they do and not by faith alone. 25 In the same way, was not even Rahab the prostitute considered righteous for what she did when she gave lodging to the spies and sent them off in a different direction? 26 As the body without the spirit is dead, so faith without deeds is dead.

Matthew 6:5 “And when you pray, do not be like the hypocrites, for they love to pray standing in the synagogues and on the street corners to be seen by others. Truly I tell you, they have received their reward in full. 6 But when you pray, go into your room, close the door and pray to your Father, who is unseen. Then your Father, who sees what is done in secret, will reward you. 7 And when you pray, do not keep on babbling like pagans, for they think they will be heard because of their many words. 8 Do not be like them, for your Father knows what you need before you ask him.

“‘Our Father in heaven,
hallowed be your name,
10 your kingdom come,
your will be done,
on earth as it is in heaven.
11 Give us today our daily bread.
12 And forgive us our debts,
as we also have forgiven our debtors.
13 And lead us not into temptation,
but deliver us from the evil one.’

Another good question to ask is how are they praying? Are they, with an open heart, truly asking for God’s wisdom and intervention on behalf of the people, the country? Or is it all for political purposes like the Pharisees? Here’s an example of a king praying for his nation from the Old Testmament (an added feature here is how he talks about foreigners and justice…), and it is filled with specific thoughts, action, not a prayer of empty platitudes:

2 Chronicles: 28 “When famine or plague comes to the land, or blight or mildew, locusts or grasshoppers, or when enemies besiege them in any of their cities, whatever disaster or disease may come, 29 and when a prayer or plea is made by anyone among your people Israel—being aware of their afflictions and pains, and spreading out their hands toward this temple— 30 then hear from heaven, your dwelling place. Forgive, and deal with everyone according to all they do, since you know their hearts (for you alone know the human heart), 31 so that they will fear you and walk in obedience to you all the time they live in the land you gave our ancestors.

32 “As for the foreigner who does not belong to your people Israel but has come from a distant land because of your great name and your mighty handand your outstretched arm—when they come and pray toward this temple,33 then hear from heaven, your dwelling place. Do whatever the foreignerasks of you, so that all the peoples of the earth may know your name and fear you, as do your own people Israel, and may know that this house I have built bears your Name.

34 “When your people go to war against their enemies, wherever you send them, and when they pray to you toward this city you have chosen and the temple I have built for your Name, 35 then hear from heaven their prayer and their plea, and uphold their cause.

36 “When they sin against you—for there is no one who does not sin—and you become angry with them and give them over to the enemy, who takes them captive to a land far away or near; 37 and if they have a change of heart in the land where they are held captive, and repent and plead with you in the land of their captivity and say, ‘We have sinned, we have done wrong and acted wickedly’; 38 and if they turn back to you with all their heart and soul in the land of their captivity where they were taken, and pray toward the land you gave their ancestors, toward the city you have chosen and toward the temple I have built for your Name; 39 then from heaven, your dwelling place, hear their prayer and their pleas, and uphold their cause. And forgive your people, who have sinned against you.

40 “Now, my God, may your eyes be open and your ears attentive to the prayers offered in this place.