Once “Shining Star” of Conservative Movement, Paul Ryan Will Not Seek Reelection 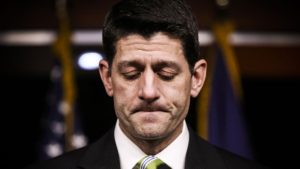 Once “Shining Star” of Conservative Movement, Paul Ryan Will Not Seek Reelection

Whether Trump has brought down the man who has been seen for years as the future of the GOP or not, the fact is Paul Ryan has been fighting against services and programs for the poor for decades. As a champion for the rich, he considers his greatest achievement to be tax cuts – thankfully he did not get his wish for stripping away Medicaid, Medicare, food stamps and more. For those who share our values, believe a budget is a moral document and that Jesus told us to care for the “least of these” not the “richest of these” this is a good day. We have spent years at CDA fighting against the Paul Ryan agenda, and it seems, though the Speaker denies this is the reason he is leaving Congress, it also seems possible the era of Trump has brought him down. Either way, we are glad to see the once “shining star” of the conservative, tea-party movement and his Ayn Rand philosophies go.

House Speaker Paul Ryan is not seeking re-election and will retire from Congress after this year, the Wisconsin Republican announced Wednesday.

“You realize something when you take this job,” Ryan told reporters on Capitol Hill on Wednesday morning. “It’s a big job with a lot riding on you … but you also know this is not a job that does not last forever. … You realize you hold the office for just a small part of our history. So you better make the most of it.”
He reminded reporters that he took the job “reluctantly” in 2015, when he took over from John Boehner, but Ryan also said he has no “regrets.”
“I like to think I’ve done my part, my little part in history to set us on a better course,” Ryan said.
Ryan’s departure is a blow to GOP members who saw the Wisconsin Republican as a stable and policy-oriented leader in a party shaken by the tumultuous Donald Trump presidency. He has been a fundraising juggernaut ahead of the midterms this fall, and helped translate GOP agenda items into legislation such as a series of tax cuts and rolling back banking legislation put in place under Democrats.
In his prepared remarks, Ryan focused on the tax law that passed last year as a key legacy he left behind and spoke at length about his desire to go home to Wisconsin to be home with his family. He said that the 2018 midterms and the chance that he wouldn’t be speaker didn’t factor at all into his decision to announce his retirement.
“None whatsoever actually,” Ryan said.
Full article here
Christian Democrats2018-04-11T18:54:17+00:00