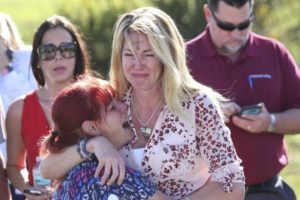 After another school shooting in which 17 kids have lost their lives, it is clear that no amount of bloodshed and death in America will move the hearts of Republicans in Congress to action. They care more about the donations from the NRA and the idea that they could lose their seat, even though a vast majority of Americans are for increased background checks and a semi-automatic weapons ban, than they do about the lives of children. Yet these same politicians win elections and raise millions of dollars on their claim to holding up “pro-life” legislation. They care about the lives of children only when it is convenient – and lucrative – for them.

There have been so many mass shootings in America that we are becoming desensitized to the violence, but we cannot let this happen. Imagine if these shootings had been done by Mexican immigrants or Muslims. We would have the President and all of the right-wing declaring war, mass deportations, and a real Muslim ban. But since the shooter doesn’t fit the GOP scapegoat profile, they simply shrug off every time as more children, more innocent Americans going about their lives, are killed, as “we are powerless.”

But they are not powerless, and neither are we! So we ask you to sign and share this petition which will be sent to the media and Republican members of Congress and the White House. The blatant hypocrisy of calling yourself a “pro-life” candidate while not being willing to take any action on simple gun safety cannot go by without being called out. They must be held accountable and they cannot get by any longer with calling themselves “pro-life” as they watch children die on the streets.

“Do this so that innocent blood will not be shed in your land, which the LORD your God is giving you as your inheritance, and so that you will not be guilty of bloodshed.” (Deuteronomy 19:10)

“For God will deliver the needy who cry out, the afflicted who have no one to help. He will take pity on the weak and the needy and save the needy from death. He will rescue them from oppression and violence, for precious is their blood in his sight.” (Psalm 72:12-14)

“There are six things the LORD hates, seven that are detestable to him: haughty eyes, a lying tongue, hands that shed innocent blood, a heart that devises wicked schemes, feet that are quick to rush into evil, a false witness who pours out lies and a man who stirs up dissension among brothers.” (Proverbs 6:16-19)