Word of Reflection After Alexandria Shooting

First, our prayers continue to go up for Steve Scalise and others shot yesterday in this attack. If it weren’t for capitol police, this scene could have been a massacre, so God bless them for their bravery. Like we saw after Gabby Giffords, there is a mood of reflection and even a minute of unity in Washington where there has been none for too long. It is difficult at best to fight against a culture of extremism, propaganda and fake news when we have a president who has championed this. Throughout the campaign and since, the rhetoric coming from the Right through Trump has been heated to a level that’s unprecedented, with violence and bullying encouraged. But as much as we point out the hate speech and dangerous rhetoric coming from the extremes of the Right, we must be sure we are keeping ourselves as progressives in check as well. Too many times on this page and in our group Christians Against Hate we have seen comments with extreme or violent language towards Trump or Republicans. We see the anger, outrage, and it is understandable that many are angry, outraged and even scared. But what is NOT OK is to take that anger and allow it to breed hate, wish curses upon people and even violence. We must instead take our feelings and turn them into positive, productive steps including our advocacy work, spreading truth but also taking these things to God in prayer, allowing His Word to comfort and instruct us and to lead us in love in all things. If what we are saying and doing is not covered under a banner of love, we need to rethink. It’s not about what “they” are doing – we are responsible ourselves to calm down the rhetoric, going high when they go low. This is all scriptural. It does not in any way mean we fight any less hard for social justice, the resistance – but when people think of our movement at CDA and #ChristiansResist we want them to see strength in love, as Jesus exhibited (meekness). This is what we strive for. And when we see those who take it too far and exhibit hate or violence, focus on conspiracy and anger, speak out! Anger/hate-inciting shock pieces is not what we are about here, and should not be part of any Christian-based org. Thank you for being part of our movement as we grow and more forward in new initiatives that are even being planned right now to help further a new kind of voice that is desperately needed in the current climate – we can’t wait to share this announcement with you in the coming weeks! We have an opportunity to lead a peaceful and effective resistance that is an example of how Christians should behave and we are in this together – we must also keep each other accountable. 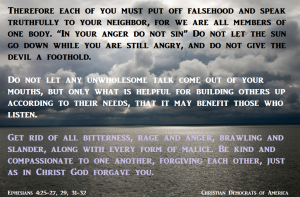