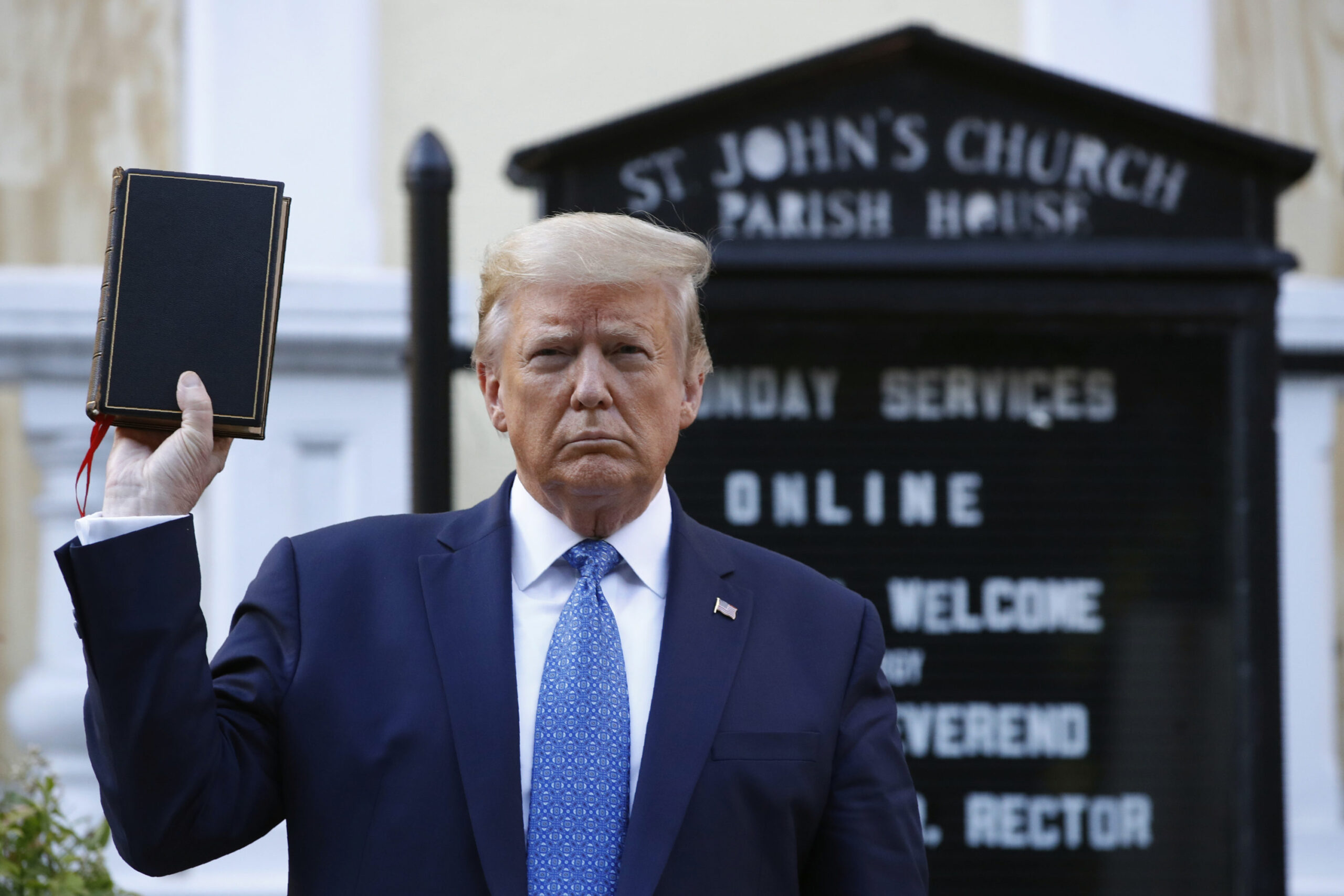 President Donald Trump holds a Bible as he visits outside St. John’s Church across Lafayette Park from the White House Monday, June 1, 2020, in Washington. Part of the church was set on fire during protests on Sunday night. (AP Photo/Patrick Semansky)

Recently, Trump stood with two sacred symbols — a church and a Bible — and managed to desecrate both of them in the time it takes to do a quick photo-op. This is a man for whom these symbols mean nothing. He doesn’t live by them. He doesn’t follow them. He doesn’t even understand what they stand for.

The church is both a symbol and a sacred place. It stands for spiritual community: the coming together of people in love and in peace. Trump had no problem with people who were in his way being tear-gassed and shot with rubber bullets. He had no problem with violence being used to clear his path. The irony escaped him.

Why was he there? He had no interest in going inside the church to survey the damage. He never alerted the minister nor asked to talk with the pastor about how to heal, how to repair, how to reconcile the damage to the church regarding the injustice against George Floyd. He had no interest in the opinions of church leaders. He stood on his pedestal and smiled for the camera.

He doesn’t understand the meaning of a church. He does not see it as a refuge for the faithful or a sanctuary for the hurting. He didn’t go inside to sit in a pew and pray. He didn’t confess his sins or the sins of the country and repent, ask forgiveness, and vow to do better. He didn’t think for a moment about the chaos he has called forth which is so antithetical to the message of Jesus and to the life of a Christian.

He stood in a place that had been damaged by hurt and fear, and rage and confusion— much of it as a result of him sowing the seeds of discord and division — and he had nothing to say.

He held up the Bible as a mere prop. To him, this was not the Holy Word of God, or the Holy Book, that can teach us how to uphold justice, show mercy, and walk humbly with God. There was no recognition of the stories in this book about the struggles against oppression, the need for a Savior, the commands to love God and our neighbors as ourselves, and to do unto others as we would have them do unto us.

This was not Trump’s Bible. He didn’t carry it to the church, nor did he carry it from the church. He does have a Bible which his mother gave him. Someone who saw it said it looked like it had never been opened.

Symbols mean something. Their meaning clarifies what our faith is about, what inspires us, and the values we follow. When they become empty vessels, it is spiritual mutilation. It turns the symbol upside down and strips it of the layers of meaning that it has taken 2000 years to build up. It’s as if he had scrawled his name on the cover of the Bible, right below the word “Holy.” And he expected us to believe the lie.

Progressive Christian leaders seem to recognize the blasphemy and mockery of this gesture. Republican Christians don’t seem to see or to care. Their silence implies consent. Silence in the midst of wrongdoings allows injustices to continue.

It is disconcerting to see how duped his Evangelical base seems to be by this man. He twists them around his little finger, and they applaud him and kowtow, much like idolaters do. Do they really believe this is Christian behavior? Do they really believe that Trump even knows what to do with the Bible? Do they see evidence of the Holy Spirit through his words and behavior? Do they see expressions of love, joy, peace, gentleness, self-control, faithfulness, and goodness?

Don’t they know that Trump is not a member of any Christian denomination, does not go to church, does not know the Bible, and he mocks those who pray? This is pure hypocrisy and he is a master at it. He has no idea what to do when standing on sacred ground except to use it to add another nail to the house he has built with pride.

Dr. Linda Seger is a CDA advisory board member and author of “Jesus Rode a Donkey: Why Millions of Christians Are Democrats.”