Just when you think the Trump administration could not get any more blasphemous, we now have Sarah Sanders standing in front of the 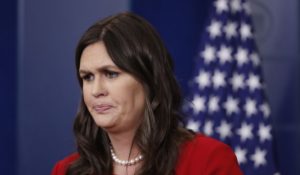 White House podium and defending the evil practice of separating families and putting children in prison camps by saying, “The Bible says to follow the law.” As reported in VOX:

“A White House briefing with press secretary Sarah Sanders grew tense on Thursday as reporters pressed her on the matter of the Trump administration’s family separation policy for asylum seekers at the US-Mexico border. Sanders upheld the practice as a matter of law and defended Attorney General Jeff Sessions’s assertion that separating immigrant children from their parents is in line with the Bible.

During a speech to law enforcement officers in Fort Wayne, Indiana, earlier in the day, Sessions said that his department’s separation of migrant families was not “unusual or unjustified” but instead a matter of law — Christian law, in fact. “Persons who violate the law of our nation are subj

ect to prosecution. I would cite you to the Apostle Paul and his clear and wise command in Romans 13 to obey the laws of the government because God has ordained them for the purpose of order,” Sessions said, according to NBC News. “Orderly and lawful processes are good in themselves and protect the weak and lawful.”

CNN’s Jim Acosta asked Sanders during Thursday’s White House press briefing what Sessions was talking about. She said she wasn’t “aware” of the attorney general’s comments or “what he was referencing” but sided with him on the “it’s what the Bible says” part.

“I can say that it is very biblical to enforce the law,” Sanders said. “That is actually repeated a number of times throughout the Bible.”

Obviously Sarah Sanders and the Trump administration have never opened much less read a Bible, otherwise they would have seen these 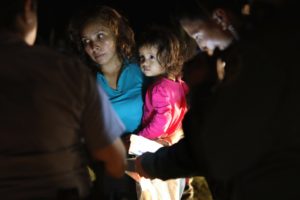 Before being sent to a processing center for possible separation, a Honduran asylum seeker and her 2-year-old waited as U.S. Border Patrol agents reviewed their papers.CreditJohn Moore/Getty Images

warnings and would know they are trouble. Here’s what the Bible really says about immigrants and children…

‘When you reap the harvest of your land, do not reap to the very edges of your field or gather the gleanings of your harvest. Do not go over your vineyard a second time or pick up the grapes that have fallen. Leave them for the poor and the alien. I am the Lord your God.”

“When an alien lives with you in your land, do not mistreat him. The alien living with you must be treated as one of your native-born. Love him as yourself, for you were aliens in egypt. I am the Lord your God.”

“The community is to have the same rules for you and for the alien living among you; this is a lasting ordinance for the generations to come. You and the alien shall be the same before the Lord.”

“Do not deprive the alien or the fatherless of justice, or take the cloak of the widow as a pledge.”

“Do not oppress the widow or the fatherless, the alien or the poor. In your hearts do not think evil of each other.”

“And whoever welcomes one such child in my name welcomes me. But if anyone causes one of these little ones – who believe in me – to stumble, it would be better for them to have a large millstone hung around their neck and to be drowned in the depths of the sea.”

Another thing the Bible really says are these things that God hates most. If they seem familiar, it is because they are all attributes of the Trump administration. What Sarah Sanders and the White House said, justifying an evil practice that is causing harm to children and babies, separating families who are seeking asylum, is blasphemy.

16 There are six things the Lord hates,
seven that are detestable to him:
17         haughty eyes,
a lying tongue,
hands that shed innocent blood,
18         a heart that devises wicked schemes,
feet that are quick to rush into evil,
19         a false witness who pours out lies
and a person who stirs up conflict in the community.

For more on the moral question of separating families and in-depth discussion on the immigrant matter, please listen to episode one of our What Would Jesus Pod podcast. A new episode will be available at 6pm PST, Thursday, June 14th with further commentary and discussion on this topic.