Trump the New Representative for Christians?! 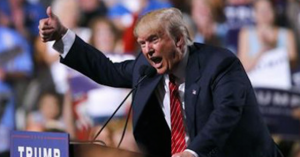 Just when you think you’ve seen it all….an article titled, “Donald Trump Made Huge Announcement To All Christians…” is running rampant on the Right Wing blogs and social media and yes, many conservative Christians are actually getting excited about this. Donald Trump the representative for Christianity?! The church, country, seriously needs a wake-up call! We aren’t posting the article because we don’t want to spread it further or give it credibility, but here is a quote:
“Donald Trump isn’t afraid to say what needs to be said. Now the billionaire, television personality and presidential aspirant has a straightforward message for Christians.’The Christians are being treated horribly because we have nobody to represent the Christians. Believe me, if I run and I win, I will be the greatest representative of the Christians they’ve had in a long time,’ Trump said in a recent interview.” (quote from article here)

Now I understand the Trump mania among the GOP – a straight-talking, new approach to an American audience hungry for straight talk. The salesmanship and celebrity doesn’t hurt either. You expect this type of thing to go over well in the world system we live in (and I have even suspected he has a great chance at the GOP nomination)! But for real, church-going Christians to embrace this? It is just another sign the church in general is getting away from living and thinking in a spiritual way, as led by the Holy Spirit. Instead, it is becoming as secularized as the world-system in general. Can you imagine what the Apostle Paul would have to say about Christians embracing a figure such as Trump to represent them? The church is behaving more and more as though we are nothing more than a group of people out to defend ourselves and our community – ignoring the teachings of the One it is all supposed to be about in the first place.

It is time to expose the truth and more than ever we must keep our focus on Jesus. His attitude, His teaching, the way He taught us to live. It is a way of humility, and does not even resemble much of the church-media circus we are seeing all around us. We can’t let the true voice of Christ to be drowned out amidst the confusion, hype and politics…and the trends like Donald Trump.

John 15:19 If you belonged to the world, it would love you as its own. As it is, you do not belong to the world, but I have chosen you out of the world. That is why the world hates you.

John 18:36-37 Jesus said, “My kingdom is not of this world. If it were, my servants would fight to prevent my arrest by the Jewish leaders. But now my kingdom is from another place.”

Jesus answered, “You say that I am a king. In fact, the reason I was born and came into the world is to testify to the truth. Everyone on the side of truth listens to me.”

2 Corinthians 1:12 Now this is our boast: Our conscience testifies that we have conducted ourselves in the world, and especially in our relations with you, with integrity and godly sincerity. We have done so, relying not on worldly wisdom but on God’s grace.