Billy Graham, the “Presidents’ Pastor” Passes Away at Age 99 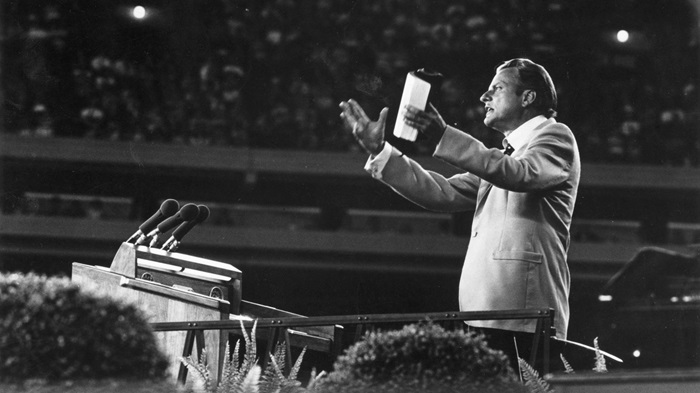 Billy Graham, the “Presidents’ Pastor” Passes Away at Age 99

Billy Graham was a historical and influential minister who brought hope and change to millions of lives.  He met, prayed with, comforted and joked with 12 U.S. presidents, his last being President Barack Obama. He found a fine balance that allowed him to become America’s pastor, Democrat or Republican. North or South. If you need a good perspective on Billy Graham, please read the article below by Rev. William Barber “It’s the Holy Spirit’s job to convict, God’s job to judge, and my job to love,” Graham often said.”

President Obama tweeted today “Billy Graham was a humble servant who prayed for so many – and who, with wisdom and grace, gave hope and guidance to generations of Americans.”

Remember that Billy Graham was not his son, Franklin, and never aligned with a political party but humbly preached the Gospel and changed the lives of millions. He may not have aligned with all of our or your views, but that does not diminish this fact. We hope history will separate the Billy from the Franklin fairly. Rest in Peace.

Statement About The Passing Of Rev. Billy Graham

Billy Graham inherited a faith in the American South that had accommodated itself to white supremacy, but he demonstrated a willingness to change and turn toward the truth. He helped to tear down walls of segregation not build them up. One biographer noted after the bombing of the 16th Street Baptist Church in Birmingham in 1963, Graham told fellow evangelicals: “We should have been leading the way to racial justice but we failed. Let’s confess it, let’s admit it, and let’s do something about it.”

Though segregated public meetings were the norm in the South, he met with Dr. King and agreed to challenge segregation before Jim Crow laws were overturned. Though he was initially used by Nixon’s Southern Strategy, he saw the dangers of being a court prophet and stepped away from the religious right in his later life. He challenged the war economy and its commitment to nuclearism in the 1980s. His life was about following Jesus and he knew that meant an ongoing commitment to be changed by love. “It’s the Holy Spirit’s job to convict, God’s job to judge, and my job to love,” Graham often said. My prayers are with his family and friends as they grieve this loss and celebrate the life and ministry of the Rev. Billy Graham. While no two theologians or preachers ever agree on everything, let us agree that the Rev. Billy Graham was a gift to many throughout the world. Take your rest, dear brother, take your rest.