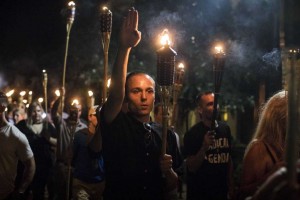 First they came for the Socialists, and I did not speak out—
Because I was not a Socialist.

Then they came for the Jews, and I did not speak out—
Because I was not a Jew.

Then they came for me—and there was no one left to speak for me.

The truth in this poem reverberates throughout the generations, and we can now see it in a whole new light…

First it was disrespect for the first black President, and I didn’t care –

Because I wasn’t black or a Democrat

Because he said he didn’t mean it

Then it was the handicapped, and I didn’t care

Then it was Mexican immigrants, and I embraced it –

Because that tickled my fear and anger

Then it was Muslim immigrants and refugee families fleeing war, but I latched onto bigotry –

Because I’m afraid and I believe him

Then it was a Gold Star family, and I didn’t care –

Because they were Muslims and see above

Then it was women, and I cared a little but shrugged it off –

Then it was Jews and I laughed it off –

Because the White House said it was a simple mistake

Because he said he didn’t know who they were and, you know, the “fake media”

Then it was acceptance of domestic terrorism and Nazis –

So what will you choose?

This is no longer about faith versus no faith, Democrat versus Republican, giving the rich more money and taking more from the poor, or minimum wage or healthcare reform or big or small government. This is the selling of a collective soul, that started with the acceptance of doubt of whether the first black President was even an America. How many times did I hear from “Christian” people a blatant judgement over the year (which is a blatant sin for all who didn’t know it) that Obama was a Muslim, that he was anti-America or somehow a foreigner. The host of Hardball on MSNBC, Chris Matthews, calls this Trump’s original sin, and I agree with this sentiment. It was the first normalization, the beginning of desensitization. However, I believe the moment Republicans chose to turn a blind eye to Trump saying national hero, former POW and fellow Republican, John McCain, was not a hero and even mocked POW’s in general, was the moment the party began selling its collective soul.

You can go through this list and see the slow erosion and progressive desensitization. This is what propagandists have used for centuries, and was a finely tuned technique in the rise of Fascism. Look what is happening at the Department of Justice in our immigration system and prison system now. People who were strict on immigration policy just five years ago would be horrified at the ripping away of families and harsh practices being used now. But instead, the desensitized wing of the GOP calls for more blood…and in blasphemy they do it in Jesus’ name.

There is a Twilight Zone episode from the great genius Rod Serling, “He’s Alive” that is the best portrayal of desensitization I have seen. I uploaded a clip of the episode to my Youtube channel during the election and it became so overrun with alt-right Nazis that I had to disable the comments eventually – probably because it strikes such a chord. But (SPOILER) it shows the journey of a young man who is first angry about immigrants and then progressively becomes leader of a Nazi-like movement, even to the point of murdering his own adopted father, who he used to love. If you think this is far-fetched, think about this: an innocent young woman was killed by a domestic terrorist on Saturday, the President of the United States has said the side she was on was equally to blame as the Nazis who killed her, and there are still people defending this President.

Desensitization works slowly. Having done numerous studies on Hitler and the rise of Nazism, it has been easy to recognize the slow erosion of morality, values and evolution of fanatical belief and paranoia. Hitler did not come in the beginning saying, “Let’s murder millions of Jews!” No, he came saying “The Jews don’t value the same things we do” and “they are taking German jobs and destroying your economy.” He appealed to something they were afraid of, angry about – an emotion. As you see from the progression above, Trump supporters, including many Evangelicals, have slowly accepted a little bigotry, a little lack of compassion, giving the Devil of hate just one small foothold at a time. Ephesians 4:27 says it perfectly:  “And do not give the devil an opportunity [to lead you into sin by holding a grudge, or nurturing anger, or harboring resentment, or cultivating bitterness]. (AMP)”

Since the beginning of the Primaries in 2015, we have seen a slow ebbing away at the moral fabric. A little yeast in the dough is all it takes, as Galatians 5:6-10 describes: this is exactly what has happened here in this country to Christian supporters of Trump: “For in Christ Jesus neither circumcision nor uncircumcision has any value. The only thing that counts is faith expressing itself through love. You were running a good race. Who cut in on you to keep you from obeying the truth? That kind of persuasion does not come from the one who calls you. A little yeast works through the whole batch of dough. I am confident in the Lord that you will take no other view. The one who is throwing you into confusion, whoever that may be, will have to pay the penalty.”

I do not believe that the majority of the people who voted for Trump thought they were voting for a President who would take the side of Nazis. But now here we are – and there needs to be a Great Awakening. “Who cut in on you?” as the Word says. A little yeast has worked its way through a large batch of dough, but there is still time for you, my Christian Trump supporting brother and sister, who thought you were just voting for change or something called “pro-life” – now is your time to say enough is enough. I won’t say “I told you so,” I will say thank you – it takes courage and putting faith, values and your country before pride. I can’t guarantee others won’t say “I told you so,” because people are angry – we have warned this could happen for a long time. We hoped it wouldn’t, but it has.

Be diligent, clear and bold. Stop this yeast before it works through the whole batch of dough.