An Open Letter to Jerry Falwell and Liberty University 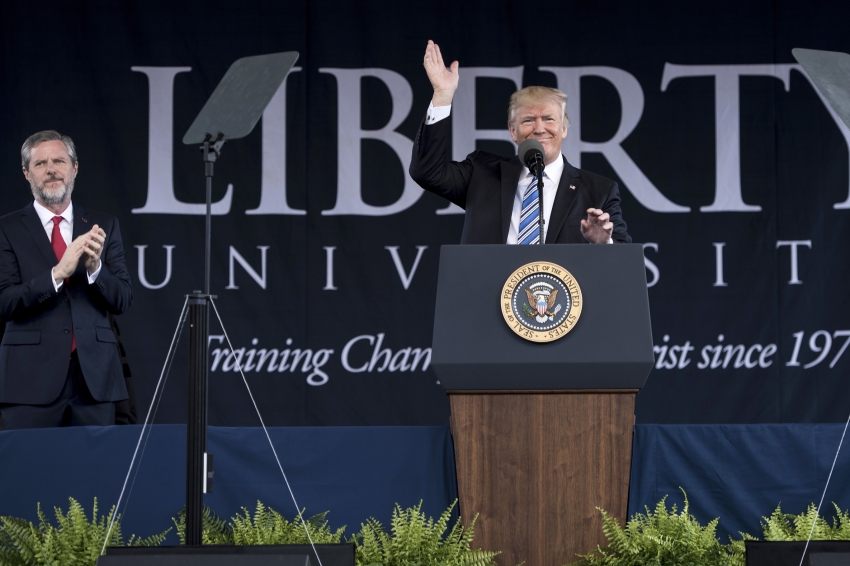 After Pastor Jonathan Martin was escorted off Liberty University by armed guards for praying and opposing the Jerry Falwell Jr. far-right message, Red Letter Christians posted an open letter to Jerrly Falwell, an outspoken Trump supporter, and Liberty University, with an invitation for a robust and respectful debate. Voices in Christian media such as Dove-Award Winner Nichole Nordeman also challenged Jerry Falwell in a tweet, asking him to consider. 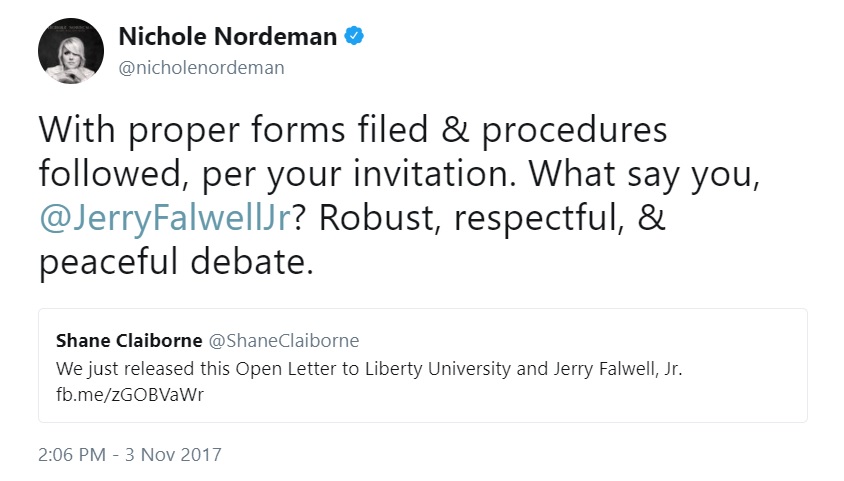 Below is the letter, and see the original article here.

We know you did not intend to make national news this week by sending armed officers to escort the Rev. Jonathan Martin off of Liberty University’s campus. You have been clear about your support for President Trump. Rev. Martin has made clear his opposition. But this fundamental disagreement, you insist, is not why Martin was barred. “The University cannot be concerned with whether its actions provide additional oxygen to either side of a debate,” your official statement said. Your only concern, you insist, is the “safety and security” of your campus.

Despite the fact that Liberty University could not exist without federal loans and grants, it is a private institution. You have the legal authority to use its police force to stifle dissent. But you say this is not your intent: “Members of the Liberty community are always welcome to engage in peaceful debate,” you wrote. Though you might prefer to asphyxiate a prophetic Christianity that criticizes your personal political positions, you understand it is not in your interest to do so.

We write, then, to ask you to make good on your promise. If you are not opposed to a debate, then host one.

As fellow ministers of the gospel of Jesus Christ, we disagree with your celebration of Donald Trump as a “dream President” for evangelicals. Along with a majority of Americans, we experience his administration as more of a nightmare. But our disagreement is not about personality; rather, we see the stark divergence in our discernment about politics as a reflection of fundamental differences in how we understand the gospel of Jesus Christ. From Isaiah 58 to Luke 4 and Matthew 25, the God who is revealed in Jesus Christ speaks prophetically against false religion that props up injustice.

This divide is not new. It is as old as the many denominations that split over the abolition of slavery in the 19th century. As Frederick Douglass wrote in the midst of those divisions, “Between the Christianity of the slaveholder and the Christianity of Christ I see the widest possible difference.” In the 19th century, this basic divide led people like Angelina Grimke and William Lloyd Garrison to part ways with slaveholding religion in order to keep their faith. In the 20th century, Rabbi Abraham Joshua Heschel argued that we forfeit the right to worship God if we do not stand with the marginalized and oppressed. We contend that the greatest threat to Christianity in the 21st century is that our Lord’s gospel would be confused with the religion of white supremacy. In our estimation, you and others who see the Trump administration as a Redemption movement are contributing to just such a conflation.

And yet, we know from the scriptures and from our own experience that the truth of the gospel is greater than our individual and corporate sins. For this reason, we are willing to pay our own way to come to Liberty University and engage in the debate which you have said is welcome. Because we believe that a diversity of voices is essential in these matters, we write together as male and female, black and white, gay and straight ministers of the gospel. We are prepared to present witnesses in equal number to those whom you would choose to represent your perspective. We only ask that we be allowed to mutually agree on a moderator and set of questions beforehand and that we have access to livestream the debate via a production company that was started by one of your alumni. You can contact us via the office of Repairers of the Breach.

We write this open letter in hope that you will be true to the promise of your public statement about why Rev. Martin was removed this week and in greater hope that America might experience a moral revival as we face the truth about how the gospel has been compromised and receive the good news that another way is possible.